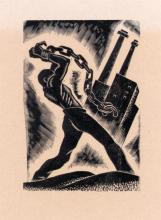 The Fisher's Robert S. Kenny Collection is an invaluable resource for researchers studying the history of 20th century labour movements, and particularly the history of the Communist Party of Canada (CPC). As the informal archivist of the party, Kenny collected a wide variety of material - books, periodicals, pamphlets, documents and ephemera - related to the radical and revolutionary left. Kenny's large collection was originally donated in 1993, after his death, and has been further augmented by other donors and by acquisition.

The library has recently added an important item to that collection: an oral history section. Beginning in 1983 and continuing until 2015, long-time Fisher staff member Tom Reid recorded a series of interviews with supporters of the CPC and other far-left tendencies. These oral histories are now fully available on the Fisher's Soundcloud page. A list of all the individuals interviewed by Tom is available on the main Kenny Collection page. In addition, he has written a comprehensive overview and background to the oral histories, “Some History of the Kenny Oral History Project”.

Complementing the main Kenny Oral History Project are interviews conducted by radio writer and producer Karen Levine in 1977 with members and former members of the CPC about the impact of Nikita Khrushchev’s 1956 denunciation of Joseph Stalin. Levine generously contributed these interviews last year. This entire playlist, which includes a rare interview with Kenny himself, can be accessed via Soundcloud. Tom has also written a background on these interviews: "Some Sidelights on Canadian Communist History - On Karen Levine’s 1977 Interviews."

One additional audio recording as part of this series is a 1961 lecture on poetry and culture delivered by Robert Kenny.