'Moments of Vision': The Life and Work of Thomas Hardy 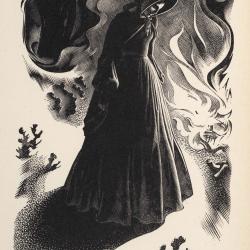 Thomas Hardy (1840-1928) is one of the few writers to have achieved equal distinction as both a novelist and a poet. He established his reputation in the Victorian period with such iconic novels as Far from the Madding Crowd, The Mayor of Casterbridge and Tess of the d’Urbervilles, set in the semi-fictional world of “Wessex.” In 1897, embittered by critics who branded his last two novels “distasteful” and “obscene,” Hardy abandoned prose and devoted the remaining thirty years of his life to writing poetry.  By the time of his death, he was not only the last of the great Victorian novelists but had also become one of England's most important and influential modern poets.

Drawing on the magnificent collection donated to the Fisher Library by the pre-eminent Hardy scholar and University of Toronto Professor Emeritus, Michael Millgate, this exhibition will include first editions, correspondence, manuscripts, photographs and ephemera illustrating Hardy’s professional and personal life.