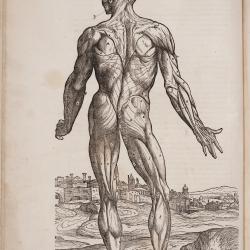 In 2014, we commemorated the five-hundreth anniversary of the birth of one of the great figures in the history of medicine. The fame and significance of Andreas Vesalius rest almost entirely on one book, his monumental De humani corporis fabrica, first published in 1543. The De fabrica (as it is commonly referred to), is chiefly celebrated for its splendid woodcut illustrations that introduced art to anatomy, and set the standard for all future anatomical illustration. The enduring significance of the illustrations is attested by the fact that they were still being copied and imitated two hundred years after their first appearance.  In addition to its illustrations, De fabrica is also a vitally important text, universally regarded as the cornerstone for the study and teaching of human anatomy. Vesalius presented anatomical knowledge from the standpoint of direct and accurate observation, that was a considerable advance on what had gone before. He also introduced a new approach and methodology for the teaching of anatomy, and provided a manual on dissection. The beautifully rendered woodcuts blend elegantly with the printed text, resulting in a masterpiece of the printer’s art - the perfect marriage of text and illustration. De fabrica is without doubt one of the splendours of Renaissance scientific book making.