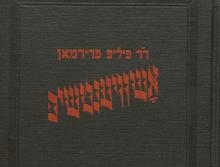 The Wolfe Lecture on the Holocaust, marking International Holocaust Remembrance Day on January 27, is now available via the Fisher's YouTube channel.

Over several decades, Professor Alain Goldschläger amassed one of the world’s largest and most diverse collections of Holocaust memoirs: over 3,500 volumes in nearly 30 languages from 44 countries from all the populated continents on the globe. Prof. Goldschläger has recently donated that collection to the Fisher Library. It was celebrated with the annual Wolfe Lecture on the Holocaust, marking International Holocaust Remembrance Day, January 27. The panel explored the significance of Holocaust memoirs in the ongoing study and commemoration of the Shoah.

This event was co-sponsored by the Thomas Fisher Rare Book Library, the Chancellor Rose and Ray Wolfe Chair of Holocaust Studies, and the Anne Tanenbaum Centre for Jewish Studies.