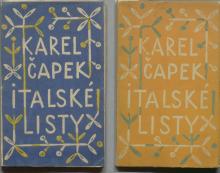 The Fisher Library has acquired a number of exceptional books designed and illustrated by the Czech artist and writer Josef Čapek (1887–1945). In 1910, Čapek traveled from Prague to Paris where he saw, for the first time, collections of African and Oceanic art, and fell under the influence of radical new artistic styles such as cubism and primitivism. The naive aesthetic of this art influenced him to experiment with simple and geometric design, which led him to collage, cubism, and expressionism. He found his artistic voice above all in designing books. He created most of his book covers and illustrations using linocut. He turned to linoleum first out of necessity, as it was a cheap and simple way to produce small print runs of books after the First World War, and then out of preference for the large, rough surfaces the printing method produced.

Čapek desired to create covers and illustrations that would give each book a unique ‘Czech’ style, a special, individual appeal, acting as posters, for, as he explained, ‘modern book jackets are the external expression of the nature and style of modern books,’ and ‘every book should have an image of its own, its face, and its figure’ (Typograifa 1927). In all, he designed over five hundred individual book covers, of which the Fisher Library has around forty examples.

Among the newest acquisitions of Josef Čapek’s work to the Fisher Library are his book covers and illustrations to translated works by Gustave Flaubert, Tristan Corbière, , W.B. Yeats, H.G. Wells, Francis Jammes, Jean Vignaud, Rose Macaulay, Georges Duhamel, and Georg Trakl,. There are also unique reprint editions of his older brother’s, Karel Čapek’s, plays RUR (Rossum’s Universal Robots, 1921, 1924, and 1931) and Ze života hmyzu (The Insect Play, 1922). The publications date from 1919, with a rare portfolio of eight linocuts by Čapek, to 1950, with a commemorative exhibition catalogue of Čapek’s books displayed by the Czechoslovak Writers Union. Many of the books display the motifs Čapek turned to frequently throughout his career, such as flowers, birds, trees, and animals. For example, we see his use of birds in one illustration to the collection of verse by Corbière (1922), and the repetitive use of a flowering vine in two editions of Karel Čapek’s Italské listy (Letters from Italy, 1923 and 1924). Josef Čapek’s illustrations to Thomas De Quincey’s essay Levana a matky žalu (Levana and Our Ladies of Sorrow, 1927) are the most striking of all his designs. The book, printed in an edition of two-hundred copies, features fifteen hand-coloured linocuts signed by the artist. 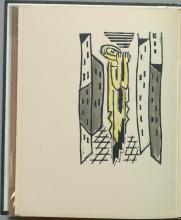 The library purchased twenty-seven Josef Čapek volumes from the private collection of Richard S. Frary, with the help of antiquarian and rare book dealer George R. Minkoff. The acquisition was made possible thanks to the Josef F. Scheybal Czech Collection Fund established in 1996 by Vlasta Scheybal in memory of her son.