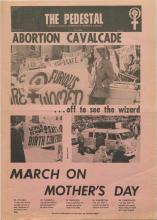 The Fisher Library is committed to preserving Canadian history up into the present day.

Periodicals throughout the twentieth century are a crucial medium for understanding how important social issues developed, informing Canada’s contemporary political climate. The Denison Collection (named for Flora MacDonald Denison, a journalist and leader in Canadian social reform and women’s rights movements) at the Fisher Library contains several newspapers published during this period which chronicle the evolution of women’s activism. One such periodical is called The Pedestal: A Woman’s Liberation Paper, published out of Vancouver.

The Pedestal contains a variety of content related to women’s rights and lives – news briefs, advice on women’s health, and comedic sketches – and also offers a snapshot of the fight for abortion access in the 1970s. One example of this is the “Abortion Cavalcade” issue, from May 1970. (Click on image for a larger view.)

This issue details various demonstrations happening across the country, discussion (or lack of discussion) with politicians, court cases, and the intersections between abortion and labor movements. Particularly interesting, one of the News Briefs refers to a “test case on abortion… establishing whether constitutional guarantees of individual liberty supercede state laws regulating abortion.” This is almost certainly referring to United States v. Vuitch , 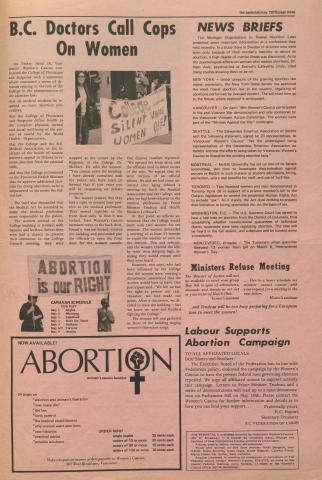 wherein the court determined that an abortion clinic could not be penalized for providing services because the wording around whether an abortion was necessary for the mother’s health (and therefore legal) was too vague. United States v. Vuitch is a significant part of US abortion history – the US Supreme Court wouldn’t hear Roe v. Wade until after deciding on Vuitch.

This Pedestal issue was published at a pivotal point in Canadian abortion history. In the nineteenth century, providing or accessing an abortion was punishable with a lifetime plus ten years in prison. By the mid-twentieth century, however, attitudes had changed enough to for the Trudeau government to rule that an abortion was legal if the mother’s life was in danger and the procedure was approved by a doctoral committee. This 1969 ruling lead to one of Pierre Trudeau’s more famous statements: “the state has no business in the bedrooms of the nation.” However, this ruling did not entail equitable abortion access across the country: biased committees and other financial or geographic barriers prevented women from getting abortions. In 1988, the Supreme Court of Canada ruled in R. v. Morgentaler that the necessity for a doctoral committee in the pre-existing abortion law was an infringement upon a woman’s security of person. The twenty years between these rulings was a tumultuous and sometimes violent time, as anti-abortion advocates and pro-choice activists struggled about abortion access.