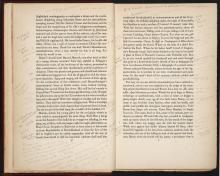 The Thomas Fisher Rare Book Library is proud to announce the acquisition of the working library of Marshall McLuhan.  The library, comprising more than 6000 volumes, was used heavily by McLuhan in the writing of his most famous works, including Understanding Media, The Gutenberg Galaxy and The Medium is the Massage.  A majority of the books bear McLuhan’s annotations and more than half of them contained material - including notes, manuscripts, and correspondence - laid into the books by McLuhan.

McLuhan is well known as a founding father of modern communications theory, and his library reflects both the genesis of his ideas and the wide-range of disciplines he drew from in this regard.  Lesser-studied aspects of McLuhan’s interests, from Catholicism to environmentalism to business management, are also evident in in the contents of the library.  Authors such as James Joyce, T.S. Eliot, Ezra Pound, Walter J. Ong, Lewis Mumford, Etienne Gilson, Harold Adams Innis, among many others, are well represented.

McLuhan’s reading habits and the specifics of his focus are palpable in the annotations that he produced during a lifetime of scholarship.  Objects of McLuhan’s obsession, such as James Joyce’s Finnegan's Wake (see image above), are riddled with layers of annotations. 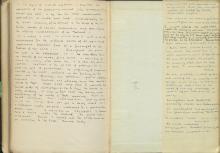 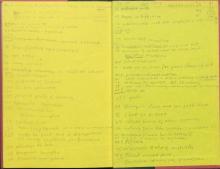 A comparison of works annotated at varying stages in McLuhan’s life reveals his changing habits of study.  As a graduate student, he transcribed long passages of relevant quotations into the books he was using; whereas, in later years his annotations became terse and increasingly coded with personal short hand. (Click on images for larger view.)

Writing other than McLuhan’s own is frequently found in the volumes, sometimes in the form of annotation in another hand (notably Marshall's son Eric McLuhan), but most often in the form of inscriptions to McLuhan from the authors of the books. (See images below; click on for larger view.)

Items laid into the books by McLuhan, now indexed and separately housed, include McLuhan’s notes, draft materials for published and unpublished material, and pieces of correspondence from his many friends, admirers and collaborators.

Lists of both the books and added-in material, removed from the books for preservation, have been created.

On Monday January 20, Marshall McLuhan's son Eric and grandson Andrew will speak on the role Marshall McLuhan's personal library played in his life and research. It will be held at the Fisher Library at 5:30. Please RSVP to Anna Maria Romano at events.library@utoronto.ca or 416-978-3600. 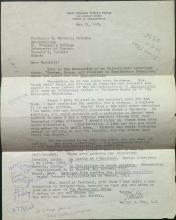