The victory of General James Wolfe at Quebec in 1759 is one of the defining moments in Canadian history. While the events that transpired in the autumn of that year on the Plains of Abraham would redirect Canada’s path towards a British form of constitutional government, they would also bring about a union of the French- and English-speaking peoples, unique in the geopolitical world of the times. The Fisher Library is privileged to be the custodian of the single most important archive of Wolfe manuscript records in the world. This collection is of exceptional cultural and historical importance for all Canadians.

The anchor of the collection is Wolfe’s personally annotated copy of Thomas Gray’s Elegy Written in a Country Churchyard acquired as the University’s seven-millionth volume in 1988. Originally presented to Wolfe by his fiancée Catherine Lowther on board his ship The Neptune, immediately prior to his departure for Quebec in 1759, the book contains Wolfe’s thoughtful reflections on the brevity and, at times, the futility of life. Eye-witnesses later claimed that on the night of 12 September 1759, as he made his final preparations for battle, he referred to the poem one last time, declaring to his compatriots, “Gentlemen, I would rather have written that piece than take Quebec tomorrow.”

Wolfe's Letters to his Parents

In 2012, the Fisher acquired 229 letters written by General Wolfe to his parents throughout 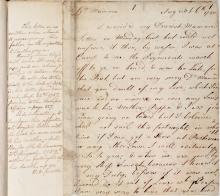 the course of his military career. Wolfe’s letters home to his family are the main documentary source for his life. Heritage Canada deemed the letters culturally significant and assisted in their purchase by giving the University of Toronto a Moveable Cultural Property Grant. Wolfe’s first letter (at right - click for a larger view) was written on 6 August 1740 to his mother when he was only thirteen years old, as he was preparing to board a warship off the Isle of Wight with his father, Edward; the last is written on 31 August 1759, only two weeks before the Battle of Quebec. Among the most interesting is a letter penned to his mother (below - click on for a larger view) shortly after the siege of Louisbourg when Wolfe takes a step back from the day to day and ruminates on the future of the Canadian colonies: 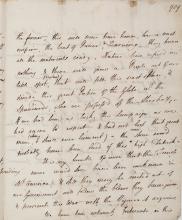 “This will some time hence be a vast empire, the seat of power & learning ... They have all the materials ready, nature has refus’d ‘em nothing”.

There are very few Wolfe letters in public institutions in Canada or elsewhere. With the exception of a handful that were lost or given away in the eighteenth century, the Fisher collection is virtually complete and offers a keen insight into the thoughts and feelings of a man who has been variously described as pessimistic and melancholic, as well as a military genius. Although transcripts of the letters made around the turn of the twentieth century were published in inaccurate and incomplete editions, the originals had not been made publicly accessible until they came to the University of Toronto. Now digitized and available for consultation, his correspondence provides an unparalleled personal view of one of the most tumultuous periods in world history, when the balance of power in North America shifted from France to England. Wolfe’s importance, however, lies in his critical role as an agent of British imperial power in Canada.

In addition to the letters, the Fisher is also the repository for all of the military commissions both of James Wolfe as well as his father, Edward, dating from 1701 to 1758, and signed by the various British monarchs who reigned during that period. These total twenty-six in all. The latter commissions are of particular interest to Canadians since they promoted James to the rank of General, but only for the duration of the North American campaigns.

The collection is also comprised of material originating with James Wolfe’s mother, Henrietta, who survived him and was his principal heir. These documents communicate the desperation experienced by the woman who was dependent on her military son’s pension and include autographed letters to the Prime Minister, William Pitt the Elder with his replies, as well as correspondence with the Secretary of War, Welbore Ellis, King George III, and Wolfe’s fiancée, Katherine Lowther concerning the late general’s bequest to her.

The collection includes a unique copy of Francis Parkman’s Montcalm and Wolfe, originally published in 1885 in two volumes. The Fisher Wolfe copy, however, is bound in eight volumes, owing to the massive amount of contemporaneous manuscript material interleaved in every volume. Among the most interesting is a manuscript written more than two years before the Battle entitled a "Description of Québec with Engineer’s Plan for the Siege, 1757" by Major Patrick Mackellar. In August of 1756, Mackellar was captured by Montcalm at Fort Oswego, and subsequently imprisoned both in Montréal and Québec. While in that latter place, he familiarized himself with the city’s geography and layout, and upon his return to England early in 1757 he drafted this report. In it he provides a detailed sketch of the physical characteristics of both the Upper and Lower towns, their defences, as well as the difficulties of navigating the St Lawrence River below the city. Although not without error, Mackellar’s information would be critical to the success of Wolfe’s final campaign. He became one of the General’s most trusted advisers, and accompanied him to North America where he contrived a method for landing British infantry by constructing floating stages in the St Lawrence River. He also warned Wolfe against the folly of a frontal attack on the city based on his own reconnaissance. Critically wounded at the Battle of Sainte-Foy in April of 1760, he still oversaw the defence of Québec during his recuperation. In November 1760 he was appointed chief engineer at Halifax, where he worked to improve the defences of that city as well. Mackellar’s manuscript was eventually published by the Office of Ordnance on 12 July 1757, with minor changes. His is but one of some 120 brief manuscripts dating from the time of the Conquest bound into the eight separate volumes.