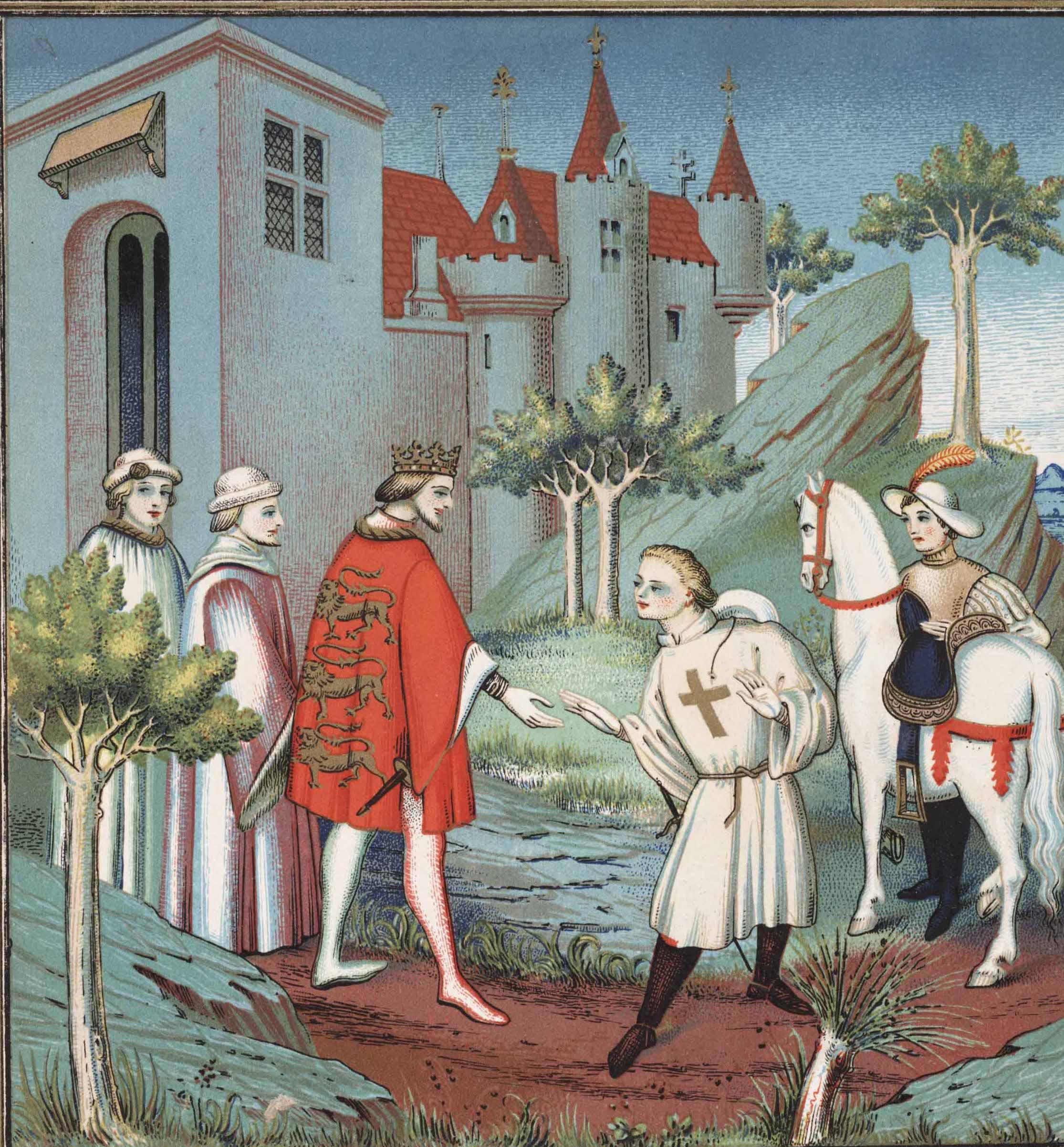 At the beginning of the nineteenth century, the Gothic revival created popular interest in medieval manuscripts, but few ordinary British citizens had the opportunity to see what they looked like until the 1840s. Without duplication technology, unique manuscripts had to be visited in person, but many specimens were scattered in remote regional institutions, or out of reach in private collections. There were extensive holdings at institutions in London, especially the British Museum, but these were less accessible than today’s researchers are likely to assume. Many Britons were prevented from seeing these collections by barriers of proximity (not everyone lived in London) and leisure (many Londoners worked during museum hours). As well, gatekeeping could be subjective and gender specific. Technically, access to the British Museum collection required only a sponsor and a credible research need, but approval was at the discretion of the reading room supervisor. Until the later decades of the nineteenth century, women were rarely seen in the British Museum Reading Room. Although their presence was permitted and there was a segregated area reserved for lady readers, women were discouraged from making prolonged visits to such a public space, both in the press and by researchers in the reading room. Barriers to access like this meant that medieval manuscripts were only finally seen by a wide audience, including women, when advances in print technology allowed for the creation of facsimiles. Our own dependence on digitisation these days makes it easy to sympathize with readers who were grateful for at least a virtual copy when they could not visit the real thing.

It wasn't until Owen Jones accomplished his advances in chromolithography that print reproductions of medieval manuscripts were possible. Whereas earlier methods for printing illustrations involved carving in wood or engraving on metal, lithograph images were in essence produced by a grease pencil on a flat stone, enabling natural flow of the artist's hand. Once Owen Jones refined the method for producing lithography in colour, print finally had the vividness of colour reproduction as well as the fluidity of composition to print full-page facsimiles of medieval codices for the first time. Exploiting this technological advance, Owen Jones' The Grammar of Ornament (1856) included tantalising details of medieval manuscripts in its chapters on Celtic and Medieval design principles.

While Jones was still preparing his Grammar, his expertise in chromolithography was enlisted by Henry Noel Humphreys for a book called Illuminated Books of the Middle Ages (1844-1849). In this comprehensive work of serious research, Humphreys draws on visits to collections from at least seven different European countries and provides an annotated list of almost five-hundred manuscripts. Jones’ colour process enabled Humphreys to print a book with the chromatic intensity and variation that was typical of medieval manuscripts. Lithographic technique provided Humphreys with the flexibility and control to make facsimiles of entire pages. In this way, Illuminated Books of the Middle Ages is able to demonstrate the relationships between lettering, capitals, illustrations, and decorative borders in the Western manuscript tradition. Humphreys’ democratising efforts to reach a wide audience make Illuminated Books something of a landmark. He issued the work in parts, dispersing its cost to the reader over five years, and allowing readers to purchase selections of plates without a commitment to buy the whole book - the low cost ensuring that a wide audience would, at last, have access to images of medieval manuscripts in facsimile. 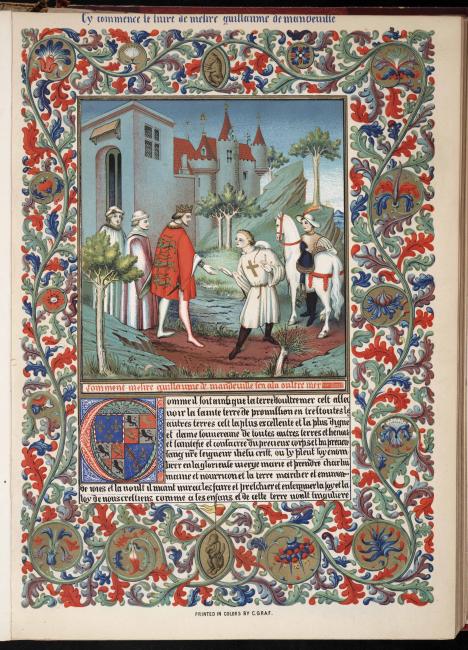 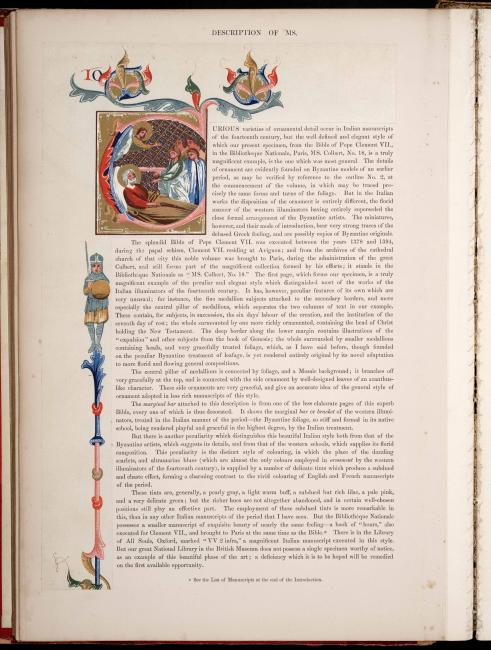 Manuals on the art of illumination soon emerged in response, a wide variety of which can be found in the collections at the Fisher. Prominent among these instructional texts were manuals that explicitly included women in their audience. For instance, Matthew Digby Wyatt, an architect who had collaborated with Owen Jones on both the Grammar of Ornament and the Great Exhibition, produced a manual called The Art of Illuminating that addresses amateur women as its audience. In his brief chapter entitled “What the Art of Illuminating Should be in the Present Day,” he vividly imagines a potential illuminator:

"a mother could scarcely do a thing more likely to benefit her children, and to fix the lessons of love or piety she would desire to implant in their memories, than to illuminate for them little volumes, which, from their beauty or value, they might be inclined to treasure through life. Interesting her children in her work as it grew under her hand, how many precious associations in after-life might hang about those very books." (pg 51)

In a deeply feminised interpretation of the scribal art, Wyatt characterises illumination as a way for a mother to infuse both artistry and maternal love into a didactic text that grows 'under her hand, much like her children. The illuminating mother encourages her children to notice and remember important 'lessons' by making them beautiful; in addition to the investment of time in their production, the potentially costly materials used to adorn them, and the ornamental qualities of such 'little volumes,' their associations with maternal care will turn them into precious keepsakes. In this analogy, the pious devotion so often attributed to the monkish medieval scribe is not just secularised but domesticated and feminised. 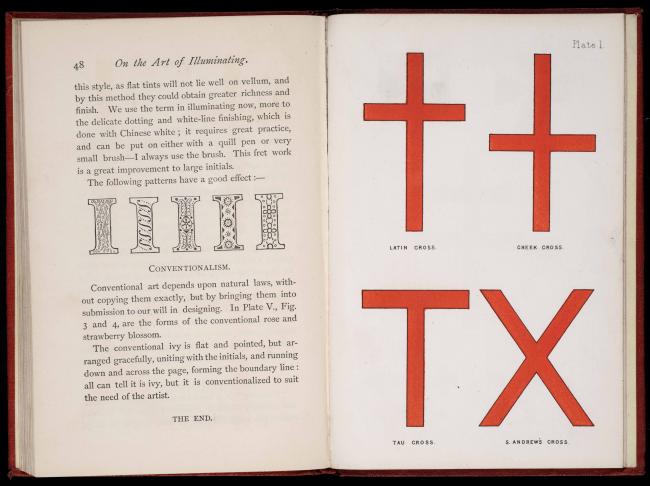 In Plain Words on the Art and Practice of Illuminating (1868), pragmatic advice on technique and materials came from Mrs. Charles B. Cooper (born Emma Wren). Cooper provides very specific instructions about materials and methods, referring to British Museum manuscripts by their call numbers, providing a list of suppliers with their addresses, and using mass-produced outlines available in the marketplace as models for colour instructions. Cooper’s preface states that the manual is 'intended for the use of ladies,' and flatteringly describes an implied audience of 'wealthy' women seeking a 'charming recreation that will produce 'elegant present[s]' by illuminating religious works. However, a less privileged reader is implied by the pragmatic tone and low cost of the book. When Cooper refers to readers who need to 'employ their time profitably,' she seems to allude to women trying to make a respectable living in the book arts. The desire to provide her women readers with practical skills was consistent with the author’s membership in the Gentlewomen’s Self Help Institute, an organisation concerned with women’s welfare, right to work, and access to higher education. The shortage of 'respectable' work that could provide an income without causing loss of class status for women who were reduced from 'easy circumstances to narrow means' was a widespread problem that prompted activism by the Gentlewomen's Self Help Institute, and similar organisations such as The Ladies' Work Society, and The Ladies’ Industrial Society in the 1870s. The plight of ladies unable to earn a genteel livelihood prompted advocates to seek the franchise for women so that they could remove obstacles to training and employment.

For a distressed gentlewoman who had the requisite skill, illumination was a means of generating an income that had several advantages. It was a practice that required little overhead: manuscripts could be created with readily accessible materials that were moderately inexpensive. As a bespoke process, manuscript illumination could avoid the hostilities of contemporary print trade unions, such as the London Society of Compositors, that worked to exclude to female labour. Moreover, manuscripts could be produced privately, without the kind of exposure that was typically attendant on publication.