Jean Molinet and the Arma Christi 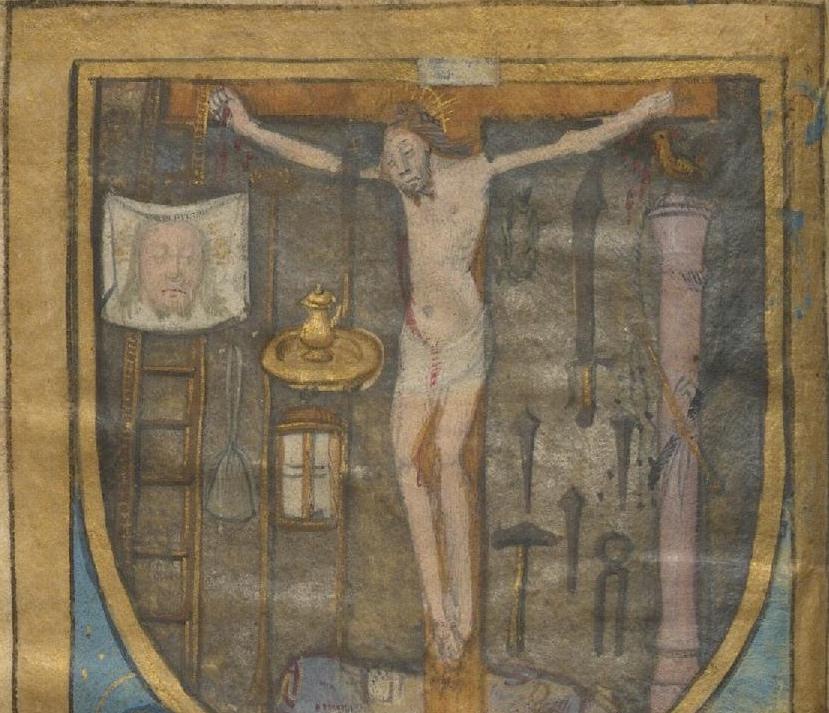 The attitude of the French poet and chronicler Jean Molinet (1435–1507) to the religious orders of his day was, at best, ambiguous. One of his more famous poems—a satirical grace in verse—begins:

Elsewhere, however, we find Molinet in a more conventional religious mood describing the Dominicans and Carmelites as true heralds of God. This more charitable description comes from a poem on the arma Christi—literally ‘arms of Christ,’ but usually known in English as the Instruments of the Passion—that features rather unexpectedly as a preface in the Fisher’s late-fifteenth-century manuscript copy of the Traité de blason (Treatise on Blazoning) by Clément Prinsault (fl. 1465). (While he may have taken a nuanced view of his own religion, however, Molinet was far from immune to entirely unnuanced religious prejudice, as the inclusion in his poem of a remark on supposed Jewish greed reveals; see below.)

The theme of the arma Christi was popular in late medieval art and literature: a Middle English poem on the subject survives in some fifteen manuscripts, and late medieval prayer books not infrequently include depictions of the arma, either as a simple collection of instruments or in the form of an heraldic achievement. Despite the heraldic associations of the arma Christi, however, the inclusion of Molinet’s poems in a copy of Prinsault’s work is unusual and has the effect of turning a standard introduction to heraldry into a hybrid secular-devotional book. This effect is heightened by the positioning of a full-page miniature of an heraldic interpretation of the arma Christi on the page facing the beginning of Molinet’s poem. This latter page is itself dominated by a half-page miniature of God the Father, the speaker in Molinet’s poem. This thoughtful integration of image and text speaks to the care with which medieval books were designed. 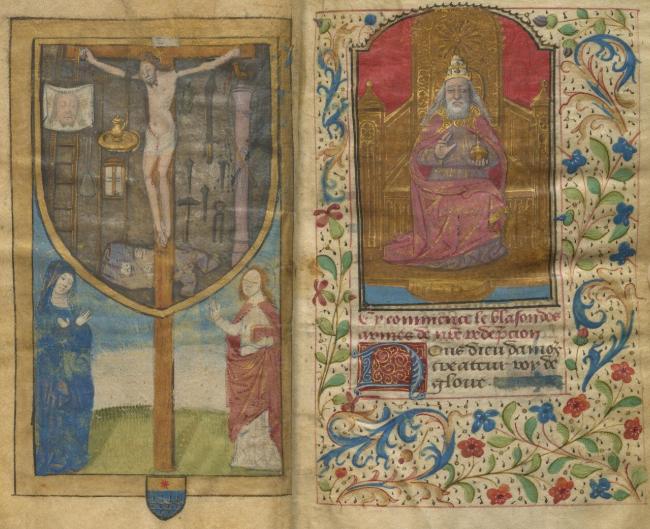 The version of Molinet’s poem found in Fisher MSS 01026 differs markedly from that printed in Dupire’s monumental Les faictz et dictz de Jean Molinet (The Deeds and Words of Jean Molinet), a critical edition that draws on several manuscript copies. Minor differences between the texts preserved in different manuscripts of a work are not uncommon, though in this case it is not only single words that are affected, but whole lines, perhaps suggesting that Molinet wrote more than one version of the poem. The version in the Fisher manuscript appears to be closely related to that found in Lansdowne 380, a sixteenth-century manuscript of miscellaneous works in French housed in the British Library. It may be translated as follows:

Here begins the blazon of the arms of our redemption:

As God of love, creator, king of glory,
I greet all those who truly, humbly love.
My Son won victory upon the Hill
Of Skulls, but many of his soldiers now,
Not knowing how to recognise my arms,
Have cast their lot upon the devil’s side.
In my beneficence I make them known—
A silver shield; a chief of shining gold;
Five wounds—so when Dominicans and Car-
melites, true heralds, wish to blazon them,
All those who loyally love will know my arms.

The golden chief is godhead’s surest sign,
The silver innocence—silver for which
The Jews desired the wounds; silver for which
Longinus carried out the act that brought
Deliverance to those who truly love.
And so I now bestow full power on
My earthly church to give my guarantee
To all who are desirous to return
To the true cause, provided that, in tears,
With contrite, faithful, guileless hearts, they come
With loyal love and recognise these arms.

You must remember them—I will return!
I will return to you on the last day
And in the Valley of Decision will
Condemn, in truth, the old adversary;
I will display these arms—who can deny
Me this?—and set in order all my host;
And when the bravest soldiers start to fal-
ter, swords and spears no longer any use,
I will deliver them. But when you hear
The trumpets sounding clear, all you who love
Me loyally must recognise these arms.

My prince, when I desired to set my rock
In Rome, to muster all good soldiers there,
The order was received with pious joy.
My prince, when you desire to see my kingdom,
With loyal love, come, recognise these arms.