IA Book of the Week: Scrap-book 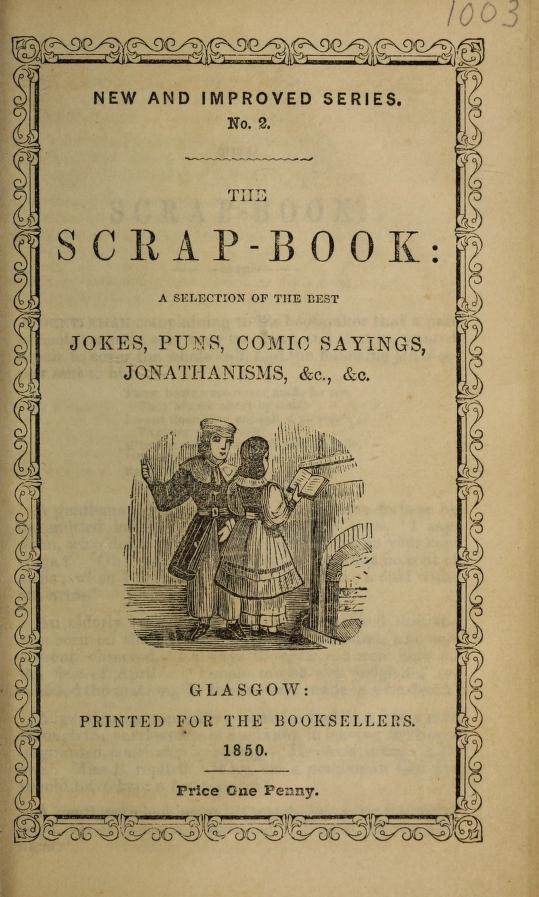 Every Monday we take a look at a specific object from the collection of Fisher items available for free on the Internet Archive. This week, Samantha takes a look at a book of comedy and jokes published in 1850, and what it can tell us about British culture at the time.

There is nothing like a so-bad-it’s-good joke to lift the spirits. Call them dad jokes, puns, or whatever else, sometimes you just have to laugh. With Toronto opening back up and all the stresses and concerns that come with that, we are cognizant that our readers might be a bit worried of what is to come. In order to alleviate some of that stress, this week’s Internet Archive Book of the Week is Scrap-book; a selection of the best jokes, puns, comic sayings, jonathanisms, &c., &c (Glasgow: Printed for the Booksellers, 1850).

This chapbook (a very short book) contains 24 pages of nonstop jokes covering a variety of topics. While humour changes across time and cultures, some of these jokes remain as groan-worthy as ever.

“Which travels fastest, heat or cold? Heat does; because you can catch cold.” (p. 5). 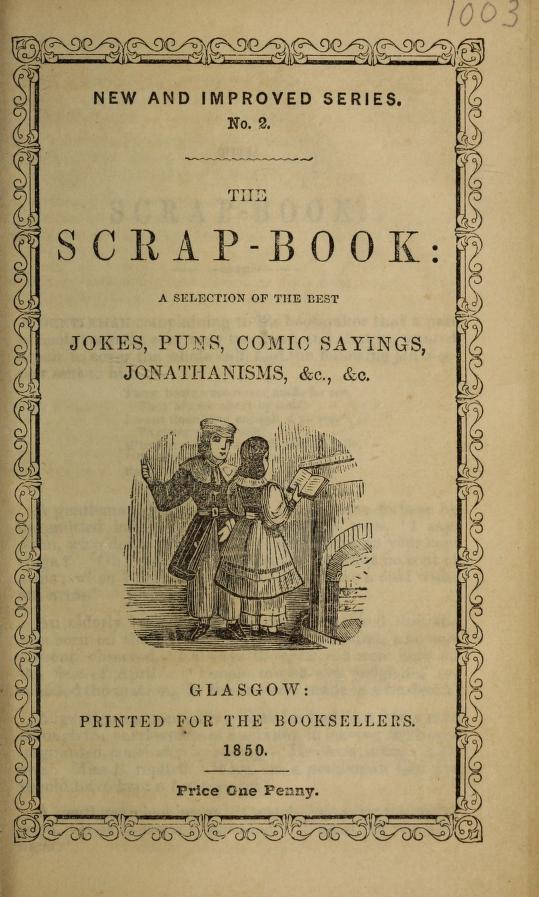 Of course, humour and comedy is a reflection of its context, and of what was considered socially acceptable by trend-setters in the society in which it was created. As such, there are as many jokes in this book which would horrify rather than delight many of its potential readers, both contemporary and modern. Jabs at the Irish and Welsh abound, jokes about accents considered lower class or less educated are common are frequent, and Black people are the targets of nasty digs in this text.

Although this text was published and sold, we must remember that not everyone alive at this time would have agreed with its content and therefore it would be inappropriate to say that it is a true representation of the British public at the times of its creation. The fact is that not all people alive or living in Britain when this was published would agree with the mean-spiritedness of these jokes. Black Britons would likely not find these jokes amusing, nor would Irish or Welsh individuals of any race. To claim that these jokes are simply “of their time” ignores the experiences of those who were contemporary to this text but did not share its approach to race, ethnicity, or nationality.

Instead, we may better understand texts such as this one as reflections of complex power structures. We must understand that the majority of texts published then and now were published for the benefit of dominant social groups: majority groups and groups with lots of capital. For a text to be created there was, and remains today, a long list of people involved. Writers, editors, printers, and booksellers all made the decision to allow these jokes to be published. Clearly, they were empowered to make light of the lives of people they considered “Other,” and if anybody in that chain of creation disagreed with the content of this text they did not take it upon themselves to halt its production. For those who had a dominant position in the society in which this text was created (largely though not exclusively white, upper-class Englishmen and women), it is clear that these jokes were acceptable and marketable. We can therefore say that this text reflects the mores of the socially dominant group, but not necessarily that it is a reflection of 1850s Britain as a whole. 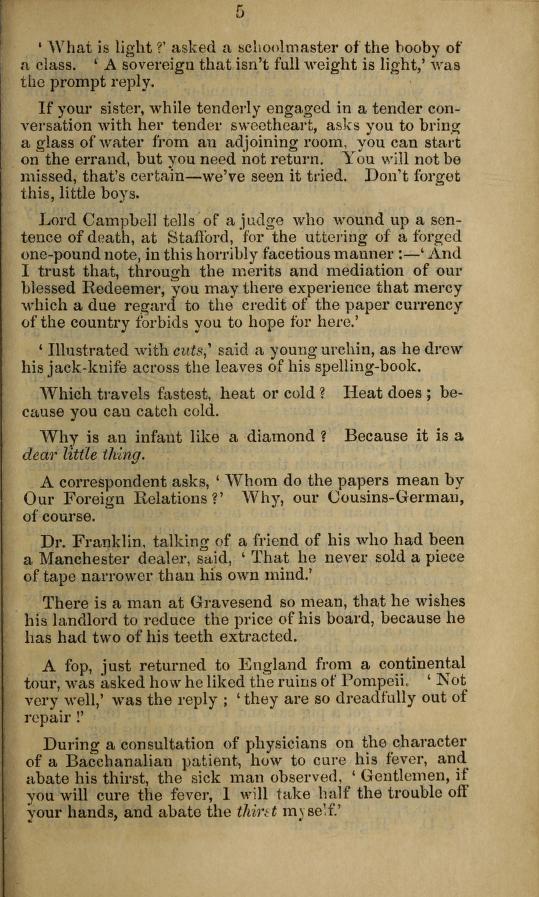 Texts like this one can teach us a lot about who had power in the society in which it was created, who was considered “Other” and made the target of bigotry and abuses, and how these existences were situated in opposition to the dominating class in the dominating imagination. Comedy is an excellent source for understanding social dynamics, but we must always remember that comedy is created with the intention of sending a specific message. In order to be able to understand its impact, we must also understand its intent.

What other examples of historical comedy do you know of that highlight similar concerns and issues, and can you think of any examples of modern comedy which may be similarly critiqued now (or might be in the future)? Let us know!