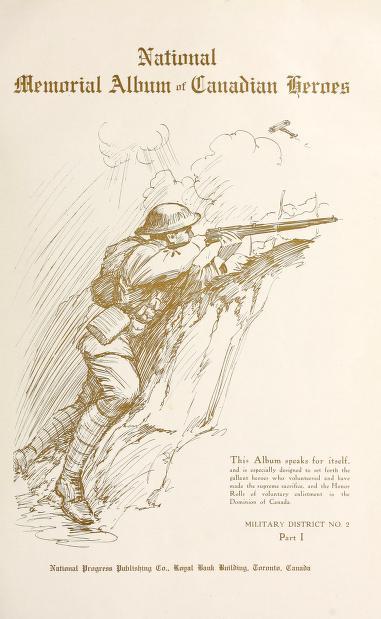 Each week, the Fisher Library presents an item from one of its many collections housed on the Internet Archive, which is open to anyone to explore. In honour of Remembrance Day, this week Rachael examines a memorial album from the First World War from our Canadiana collection.

The National Memorial Album of Canadian heroes was published in 1919 in Toronto by the National Progress Publishing Company. The album is filled with photographs of young men, many of whom died, serving in World War One. It is mainly organized by Toronto businesses. Heading each section is the names of employees from a particular workplace, followed by a page of photographs. For most of the album, the businesses listed are located in Toronto, though some mention other branches of the company in Montreal and Winnipeg. Towards the end of the book, there is also a section devoted to employers and soldiers of Hamilton. 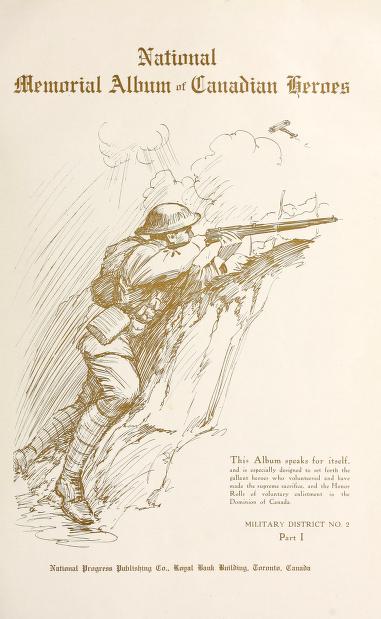 The album begins with several pages featuring portraits of important men such as the Duke of Devonshire and Sir Robert Borden. There is no table of contents for this book, and the first pages states that: “This album speaks for itself, and is specifically designed to set forth the gallant heroes who volunteered and have made the supreme sacrifice, and the Honor Rolls of voluntary enlistment in the Dominion of Canada.”

Taking the place of an introduction is a poem:

“A night, a vigil, a mother keeps, for her babe, her son, who softly sleeps”

“A night, a vigil, a blood-stained field, a son, a soldier, who’ll never yield”

“His thought, of home, to his mother flies, his heart, is hers, ‘neath starlit skies.”

“An Empire waiting on many a son.”

The excerpts from this vigil echo the rhetoric that Mother Canada has sent her sons to war. The poem describes a mother raising her son who, as he ages, hears the call to serve his country. While he is away he thinks of his mother at home, pining for the day he can return. The mother in the poem represents the entire country, waiting for its soldiers to arrive home safely. 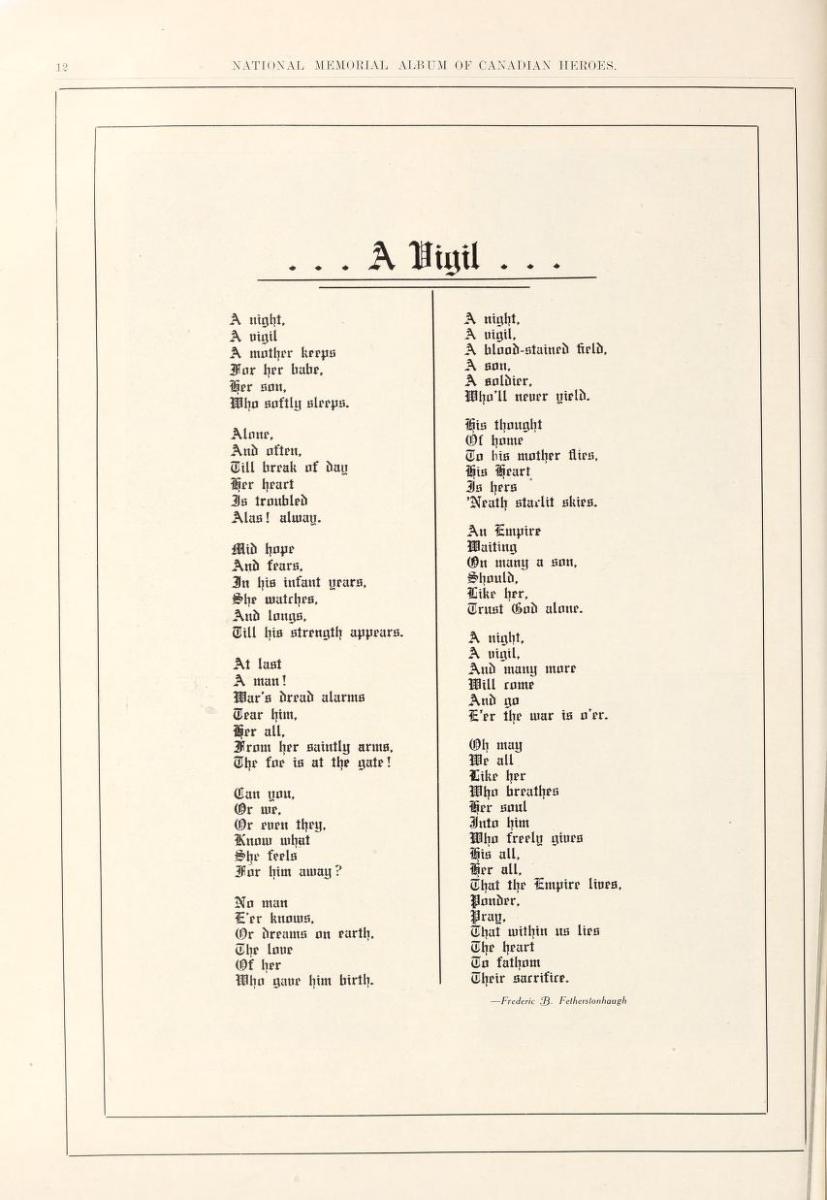 Each section for a specific Toronto business includes a “roll of honor” containing names of employees from that business who enlisted for service. The adjacent page contains photographs of young men, presumably from the same workplace. The names listed under the images are not the same as those listed in the roll of honor. It is unclear if all the men in the images died overseas, but one can assume so, as it is a “memorial” album. Some of the honor roll pages include small symbols next to the names of men listed with a legend at the bottom explaining them. Their meanings include wounded, taken prisoner, killed in action, awarded military cross, awarded military medal, and awarded King’s stripe. 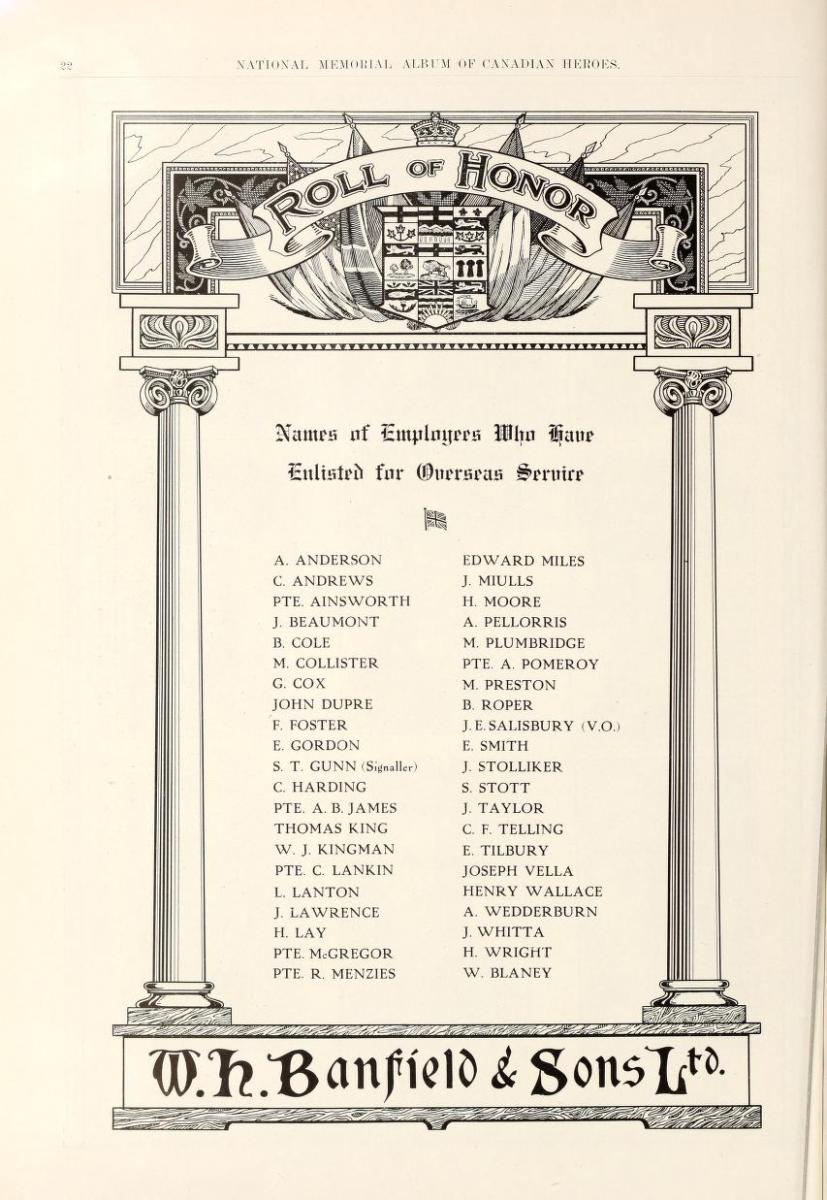 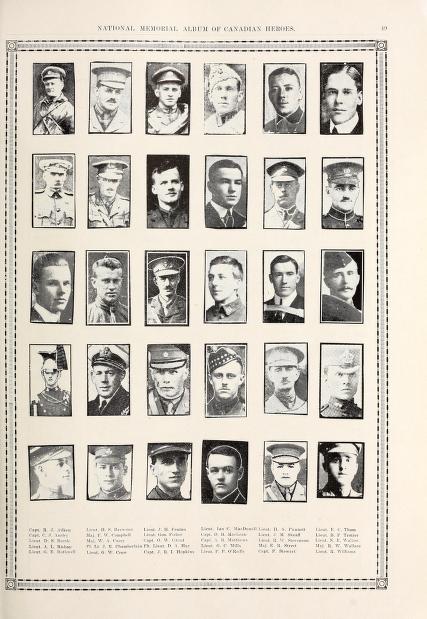 Flipping through the pages of the album one can see that women as well as any soldiers of colour are absent. Women actively participated in both world wars in several different capacities including nursing, munitions and supplies manufacturing, organizing aid on the home front, and involvement in the military itself. Over 3000 Nursing Sisters served in the ranks of the Canadian Expeditionary Force, and 2504 of them went overseas. In addition to nursing, many women took over the jobs of the men who fought abroad. From our contemporary perspective, we wonder if the album might have included a dedication to these women or perhaps an indication that they had taken over for the men at any of these companies. Indigenous men also served during the Great War, but that is not clear from the contents of this album.

While this album does not necessarily paint a full picture of those who served in the First World War, it is still a reminder of what Canada gave up so that future generations could live free.

"Within us lies, the heart to fathom their sacrifice."