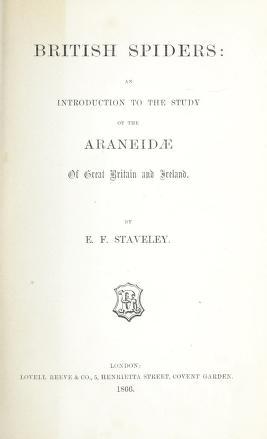 Each week the Fisher Library highlights an item from one of its many digitized collections available online on the Internet Archive. This week, Rachael takes a look at a book from our Biodiversity Collection. 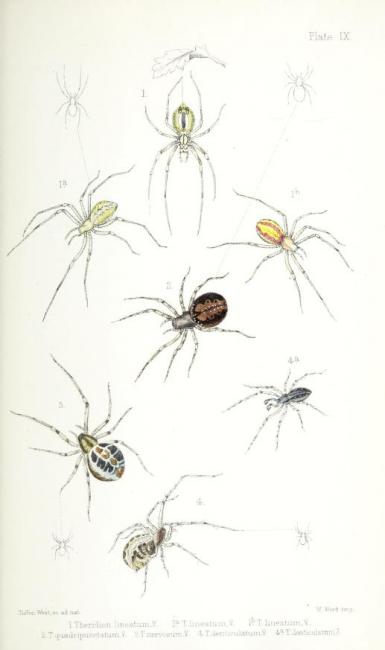 For many around the province it seems as though spring weather (and in some places summer!) has finally arrived. Often, we associate the spider with fall and Halloween; however, most spiders make their presence known in the spring when the warmth brings them out of dormancy. If you are someone who has no qualms with the eight-legged critters, then E.F. Staveley’s “British Spiders: An Introduction to the Study of the Araneidae of Great Britain and Ireland” published in 1866 would be an ideal summer read. Staveley produced 368 pages of useful information about spiders, along with dozens of illustrated plates. The book begins with a very brief preface followed by a table of contents with each chapter broken down into sections. Some of these sections include “Structure of the Spider,” “On Collecting Spiders,” and “Tabular Arrangement of Nests, Cocoons, and Eggs.” There is also a list of plates with the spider’s name and a symbol denoting whether it is male or female. 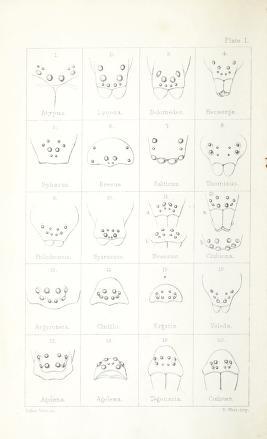 In the introductory remarks, Staveley acknowledges the reputation that spiders have. “That spiders are ferocious in their habits is undeniable, the males fighting with great fury, and the females, usually larger and stronger than the males, frequently devouring their partners; but it seems probable that the feeling of disgust commonly excited by their general appearance has had much to do in giving them so ill a name.” While this may not be true, the author goes on to explain that few other creatures exist in such a way that those who come across them feel compelled to kill them. 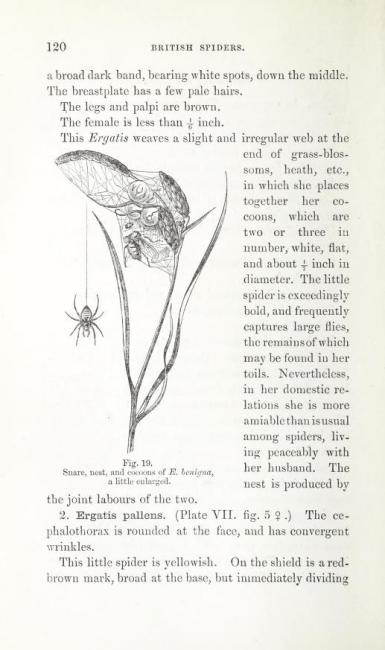 The second chapter of this book goes into great detail about different kinds of spiders found in Great Britain and Ireland. Information includes the Latin name, physical descriptions and the differences between male and female, characteristics, mating habits, and more. If collecting specimens is more interesting to the reader, chapter four contains tips on capturing and keeping spiders. Staveley states the importance of knowing what spider one is attempting to catch well in order to increase the chances of a successful capture. He claims that using a “pill-box” is the best way to capture and keep the specimen as it can be captured and examined alive. Once the examination is complete, he offers suggestions on how to preserve the creature for your collection. However, doing so is not ideal if you subscribe to the belief that killing spiders brings bad luck. Perhaps it is best to just examine these not always welcome house guests from afar. 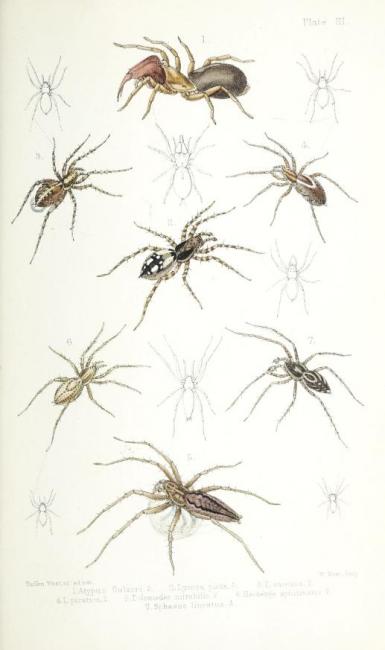