IA Book of the Week: Birds 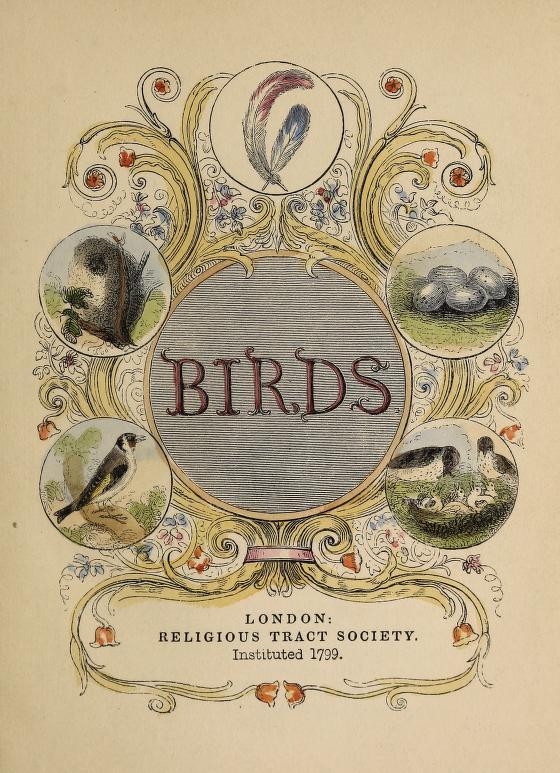 Every Monday, the Fisher Library highlights a book from one of its many collections on the Internet Archive. This week, Rachael takes a look at a beautiful item from the Biodiversity Collection.

In 1842, “Birds” was published by the Religious Tract Society of London. The 172 page book contains many lovely vignettes, illustrations, poems, and a lot of insightful information on our feathered friends. The book begins with a table of contents, which contains brief descriptions of the chapters included. The chapters in “Birds” are The Activity of Spring, The Nest, the Egg, The Feather, The Song-Bird, and the Instinct of Birds. 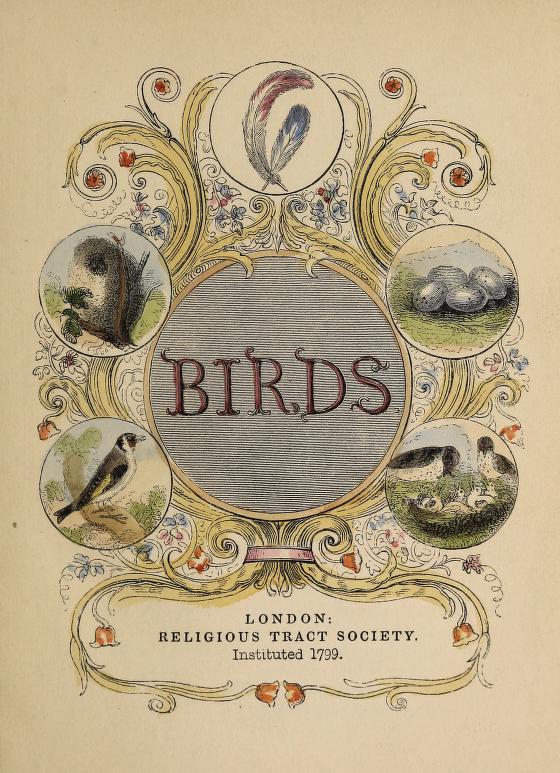 The first of two chapters on the nest begins with a brief introduction called “The Activity of Spring.” The author describes how as soon as the snow melts, birds begin the building of their nests. “No sooner have the tress put forth their leaves, than millions of birds commence their labours.” The chapter then launches into a discussion of the nests of specific birds, interspersed with illustrations and poetry. Some of the birds discussed in this chapter are the robin, partridge, golden eagle, ostrich, and the sand martin. The author makes a point to describe what we may think of as non-traditional bird nests. One example of this is the nest of the sand martin, who mines holes in sand or chalk cliffs to place its nest instead of placing it in tree. 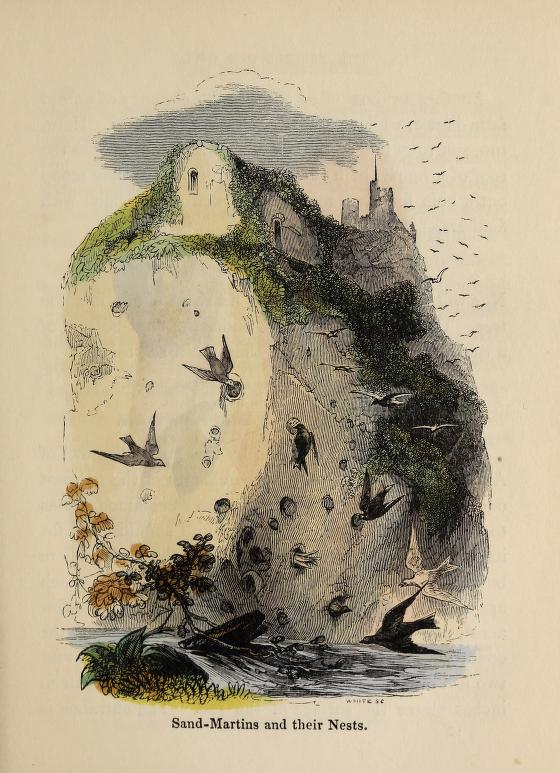 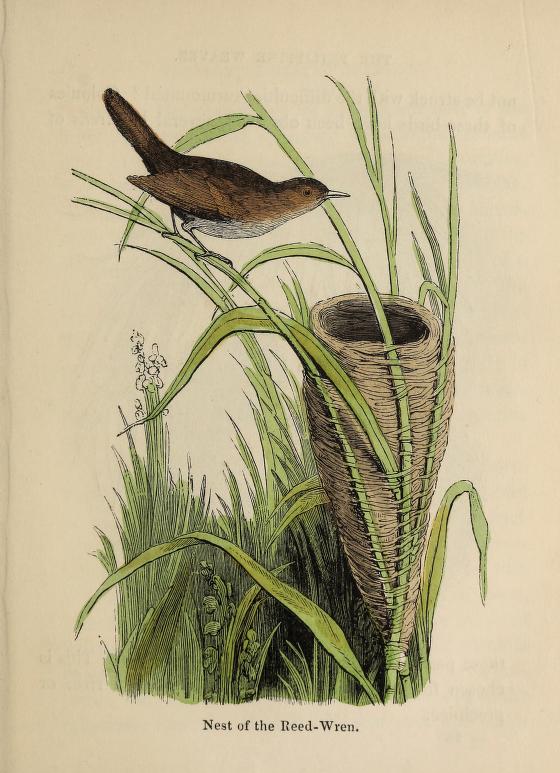 It is, of course, not surprising to see that much of “Birds” contains religious references and parables, as it was produced by the Religious Tract Society of London. The beginning of the chapter on the egg is a religious story about a man escaping persecution who is nourished by a hen’s egg that is delivered to him daily at his feet. “This faithful sufferer for the truth’s sake received the egg as from the hand of God.” Stories of birds doing the work of God are scattered throughout the book. The second part of the chapter focuses on the egg itself, its structure and care during incubation and what happens after it has hatched. Here, religious text is less prevalent as the process of a chick being born is described through scientific observations.

Chapter three focuses on the feather. The start of this section describes the physical make-up of the feather, stating that despite the proverb “light as a feather” it is composed of a strong substance used in no other class of animals. A number of birds and the differences in their feathers and wings are discussed with an overtone of awe. An example of this can be observed in the section on the humming-bird.

Now sink to shade – now like a furnace glow." 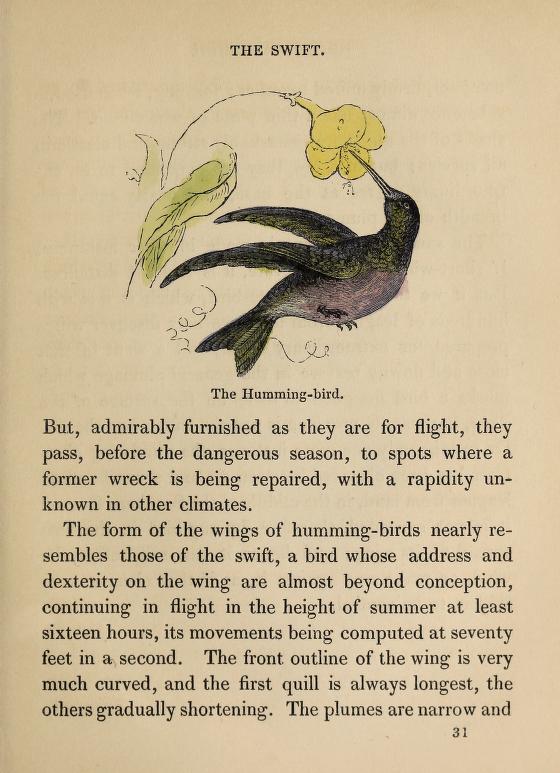 The final chapters of the book emphasize the nature of birds and how they act, with a focus on songbirds and their physiology, as well as the instinct of birds. “Instinct appears, for instance, in feelings akin to those which are displayed by human beings.” The author uses the example of the turtle dove to illustrate this point by stating how attached they are to their mates. The comparison between man and bird is further developed by describing how the mother bird takes care of her young and how even the gentlest of birds can turn into an aggressor if her babies need protecting.

As the leaves change colour and fall from the trees, October is a wonderful month to explore nature's beauty. Perhaps readers of "Birds" will then be so inspired to take a trip around the city or neighboring parks to get some fresh air and listen for a song-bird's tune. 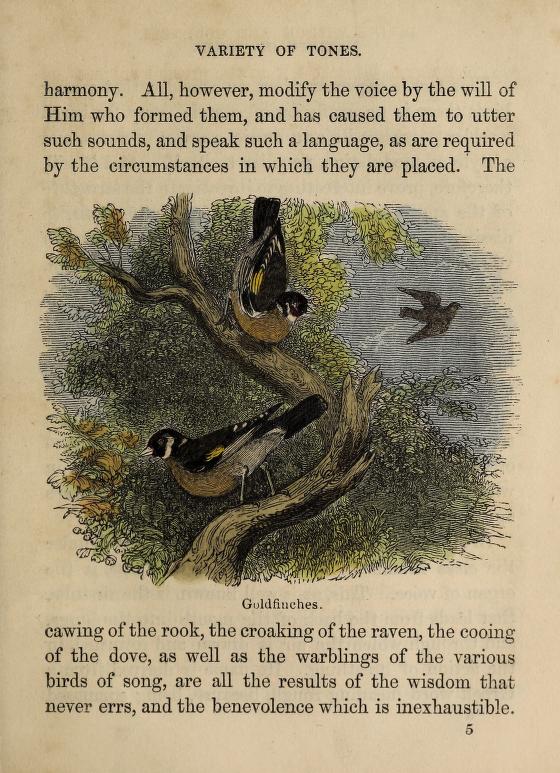