It’s long been said that Toronto is, first and foremost, a hockey town. And yes, while it’s true that the NHL’s Toronto Maple Leafs suck a significant portion of the professional sports oxygen in the city – despite its lack of silverware for the past 50-plus years, it should be pointed out (I write as a native Montrealer) – it’s not the only game and team in town. Historically as well. In fact, even before there was a Maple Leafs hockey organization – the original hockey squad from Toronto that joined the NHL in 1917 were called the Arenas, changed its name to the St. Patricks two years late, and eventually adopted the name Maple Leafs in 1927 – there was the Toronto Maple Leafs, professional baseball team, which played in the Eastern League and then International League beginning in 1896. But even before that, there was another pro ball team in the city: the Toronto Canucks.

While baseball might be considered America’s pastime, the sport has a long and rich history here in Canada – the first recorded game was purportedly in 1838, in Ontario – and particularly in Toronto. The city’s first professional team was formed in 1885, playing in the Canadian League, a minor league consisting of five Ontario teams (including, perhaps oddly, two from Hamilton), according to Baseball Reference. The team very nearly joined the nascent National League professional league in the United States the following season, which was looking to add another location. Four cities were initially jockeying for selection. According to an 1896 article in Sporting Life magazine, Toronto presented a strong case:

"In point of population it surpasses Indianapolis, and in regard to sporting enthusiasm, none of the other cities can approach. It is a mistake to suppose that base ball in Canada at present time amounts to a craze that is liable to die out in the midst of the season. The game has a strong hold there." (Source)

In the end, it decided against applying to join the National League, and instead latched on to the newly formed International League (also called the International Association). Now called the Toronto Canucks, the team played out of the newly built Sunlight Park – in a preview of the eventual corporate naming of stadiums and arenas, it was originally called the Toronto Baseball Grounds, but changed its name when the Sunlight Soap factory was built nearby – in the east end of the city, on Queen Street west of Broadview. (There is now a park and a plaque at the site.)

While the Fisher's collection of baseball material isn't deep and comprehensive - although it does hold the archival manuscript collection of Toronto writer and noted baseball fanatic Raymond Souster, who wrote numerous poems about the game - the library holds the printed schedule from that very first season of the Toronto Canucks: a small rectangular-shaped 32-page booklet showing the dates and games for every team in the league. Toronto's games were, of course, listed first for each day's play since this schedule would have been printed for a Toronto audience. As seen in the first image above, it was issued "Compliments of Felcher & Bond Toronto" - Felcher being L.B. (Lemuel) Felcher, one of the directors of the Toronto Baseball Association. It is a wonderful document, and it remains in near-pristine state.

Helpfully, the scores of some of the games have also been recorded, although sadly this recording ends around mid-season in August. Even better, in some instances, the spaces for numbers of hits and errors are also filled in. Although the veracity of these stats can be called into question. Nine errors in many of these games seem a bit dubious - or it suggests the quality of play was less-than stellar. 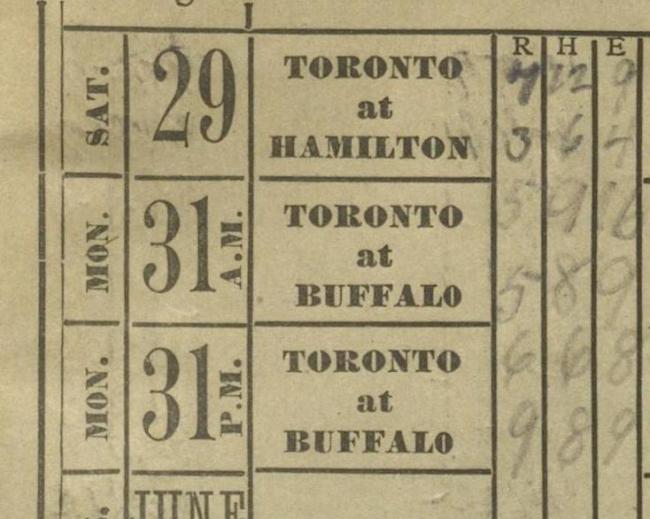 Of course no schedule would be complete without a few advertisements, to presumably help pay for the cost of printing. This adds an extra layer of interest to historians of early Toronto, even those who aren't baseball fans. This one consists of three ads, including one for the Woodbine Hotel, co-owned by Felcher. The ad on the back cover of the schedule, for Cox & Co. stock brokers, also belies the idea that fans of baseball tended toward the lower classes in the city.

In terms of the team that year, it finished the season in third place, with a record of 53 wins and 41 losses – its full roster, which included the wonderfully named Peek-A-Boo Veach, can be found here. It did find success the following year in 1897 when it won the pennant with a record of 65-36. This iteration of the International League however would only last another few seasons as it folded in July 1890, and Toronto was left without a professional club.

The team would eventually resurrect itself as the Maple Leafs in 1896, playing as an A-level team (just below the Major League Level) in the Eastern League and moving to a newly built stadium on the Toronto Islands at Hanlan's Point. This stadium was the site of an event that would further Toronto's role in baseball's history: in 1914, a young pitcher named Babe Ruth, playing for the visiting Providence Grays, hit his first professional home run, a three-run blast over the right field wall, in a 9-0 win for the Grays. (Lore is that the ball still sits somewhere at the bottom of Lake Ontario.) The Toronto Maple Leafs baseball team would end up with its own storied history, winning 12 pennants before folding in 1967. Still, the Maples Leafs name lives on for those that sit on the hillside next to the all-grass baseball diamond at Christie Pits on a Sunday afternoon in the summer, to enjoy nine innings of the team that now plays in the Inter-County Baseball League – a reminder of the great history of baseball in Toronto.