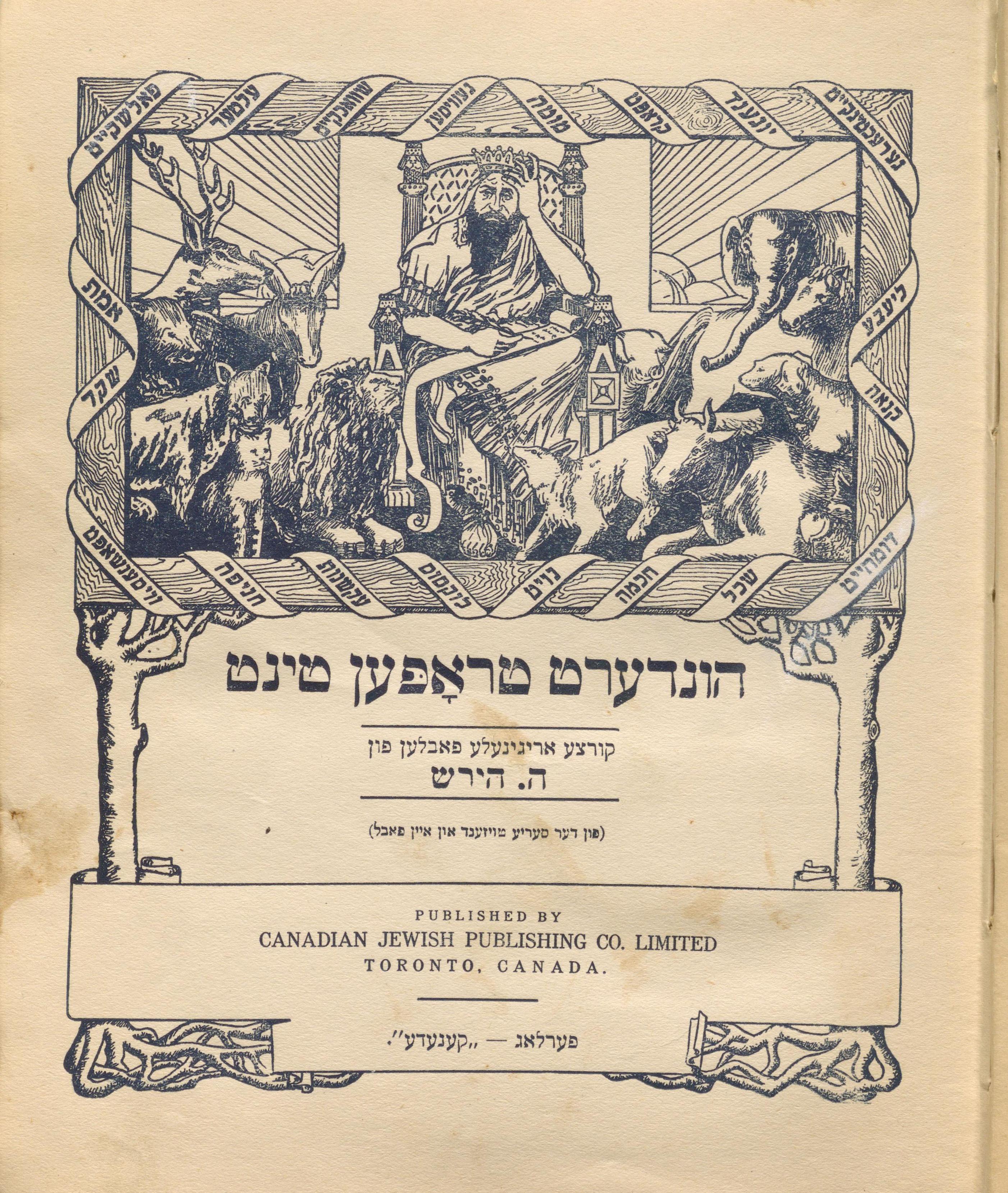 March 6 marks the 187th birthday of the City of Toronto. To celebrate, the Fisher staff have gone through our collections and picked some items to highlight some of the richness of the material related to this great city. We will post these beginning today, and they will run until next Friday, concluding with a post about a special new item that's been digitized. We hope you enjoy this series, "Happy Birthday Toronto".

A significant part of what makes the City of Toronto what it is today is the diversity of its population. In fact, Toronto has been recognized as the most diverse or multicultural city in the world. Therefore, on the occasion of Toronto’s 187th birthday, it is most fitting to look back at some of the history of that diversity; accordingly, this post will look at the early history of Hebrew printing in Toronto. 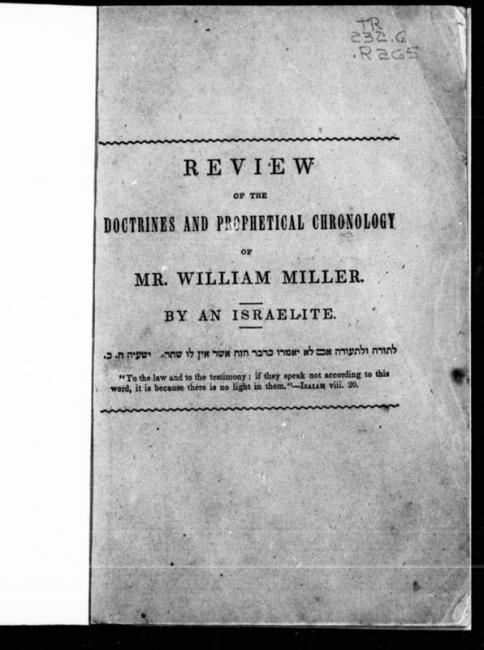 Jewish communities in Canada started arising later and in smaller numbers than those south of the border, and consequently the beginning of Hebrew printing in Canada was also later and more modest. Moreover, it is not the needs of the Jewish community that led to the earliest usage of Hebrew type in Canada. In fact, while the oldest established Jewish community in Canada was in Montreal, in which the earliest Canadian synagogue was founded already in 1768, it was in Toronto that the earliest Hebrew type is known to have been used, in 1844, ten years after the incorporation of the city of Toronto. At that time, the Jewish community in Toronto was still very much in its infancy - only 12 Jews were recorded in the census of 1846 - and the book’s author who identified himself as “an Israelite,” was most probably a Christian. Hebrew type is used for a verse from Isaiah on the front cover of this book, entitled Review of the Doctrines and Prophetical Chronology of Mr. William Miller, as well as for some scattered words throughout. 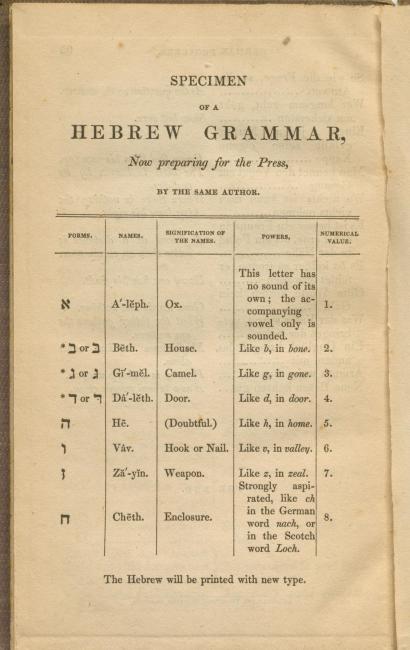 Just one year later, a more significant undertaking, by Jacob Maier Hirschfelder (1819–1902), was in the works. At the end of his first book, A Key to German Conversation, published in 1845, Hirschfelder included, as an advertisement, one page of a Hebrew grammar - which includes some Hebrew letters - that he was preparing. Unfortunately, that project never reached fruition and all that is left is this single appendix, which itself is quite rare. A copy of this book, the author’s presentation copy to P.B. De Blaquière - the first chancellor of the University of Toronto (1850-1853) - which includes this advertisement page, is held at the Fisher Library.

As his name indicates, Hirschfelder was Jewish, and is in fact one of the only identified Jewish residents of Toronto in the 1840s. Hailing from Germany, Hirschfelder began his career as tutor of Hebrew at King's College, the forerunner of the University of Toronto. Subsequently, he was appointed as "lecturer in Oriental Literature" in 1850 and is considered the founder of Oriental Studies at the University of Toronto. By the time of his tenure at the university, Hirschfelder had converted to Christianity, and he died as an Anglican; it is unknown whether he had converted upon his appointment, given that until 1850 only Christians could teach at King’s College, or at some earlier time. 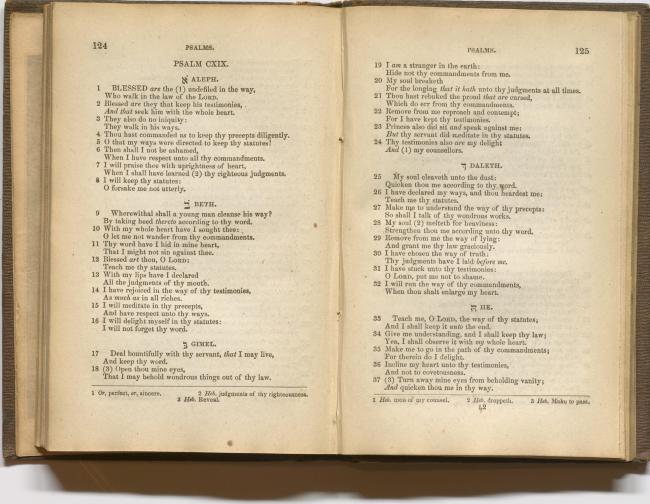 Hebrew type was used again in Toronto in 1851, this time in an edition of an English translation of the Book of Psalms, printed by Lovell & Gibson. In the original Hebrew the stanzas of the 119th Psalm are arranged according to the letters of the alphabet and, accordingly, in this edition each stanza is given a Hebrew-letter heading.

The next major accomplishment in Hebrew printing in Canada, came again in publications by Hirschfelder, a decade after his German Conversation. In these later publications - The Biblical Expositor and “An Essay on the Spirit and Characteristics of Hebrew Poetry” (Toronto, 1855) - Hirschfelder made use of Hebrew with vowel points (which are used to indicate proper pronunciation), a much more complex technical challenge. 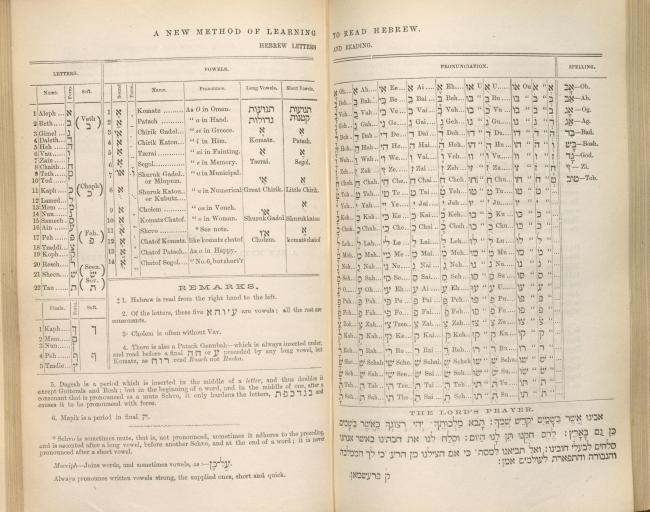 A decade later, Hebrew print was more widely used in Toronto publications, in a number of works by another Jewish convert to Christianity, Charles Freshman (1819–1875). Having been trained in Judaism and Hebrew in Prague, Freshman briefly served as rabbi of Quebec City before his conversion, following which he served as Minister at the Wesleyan Methodist church in Hamilton. One of Freshman’s books, The Jews and the Israelites (Toronto: Dredge, 1870), contains two “firsts” for Canadian books: a Hebrew fore-title and double-opening with Hebrew characters, entitled “A New Method of Learning to Read Hebrew,” which includes Hebrew letters and their pronunciation, as well as “the Lord’s prayer” in Hebrew.

These early uses of Hebrew type reflect the interest in Hebrew among Protestants in the 19th century, often with the assistance of Jewish converts to Christianity. Nevertheless, soon enough Jewish authors too made use of Hebrew type, though in the 19th century synagogues and other religious organizations still needed to turn to printing houses abroad to fulfill their needs for fully-Hebrew texts. 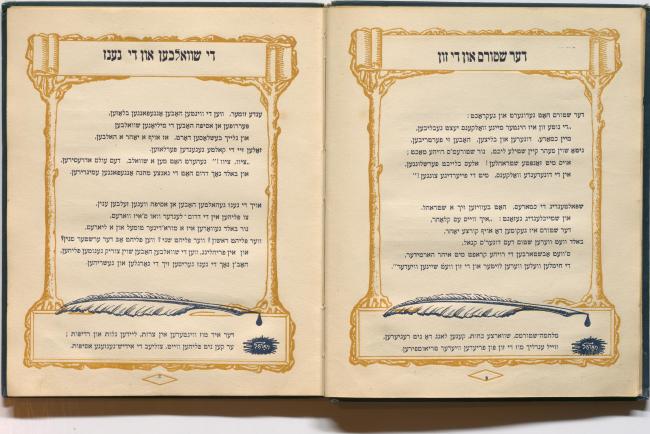 By 1900, ten printing houses in Toronto had made use of Hebrew type, while in Montreal only two or three printers had. However, it was not until 1910 that the first full length book in Hebrew characters was printed in Canada, in Montreal, and, despite some earlier attempts, 1915 saw the first such book printed in Toronto. This latter was a Yiddish collection of fables, Hundert Tropen Tint, published by Ferlag Kenede (the Canadian Jewish Publishing Company). The author Hershl Hirsch (1880–1931) came to Canada in 1904, after studying at the University of Kiev and founded the first Yiddish newspaper in Toronto, Der idisher zhurnal. That same decade saw the beginning of Canadian rabbinic publishing, with the publication of a small booklet on Jewish ritual baths (Mikveh Yehudah, Toronto 191-), by the Polish rabbi Yehudah Leib (Yudl) Rosenberg who arrived in 1913, but left for Montreal in 1918. Subsequently, following the First World War, Hebrew and Yiddish printing gained momentum in Toronto and elsewhere in Canada.