Happy Birthday Toronto: Album of Drawings and Sketches of Toronto and Surrounding Areas 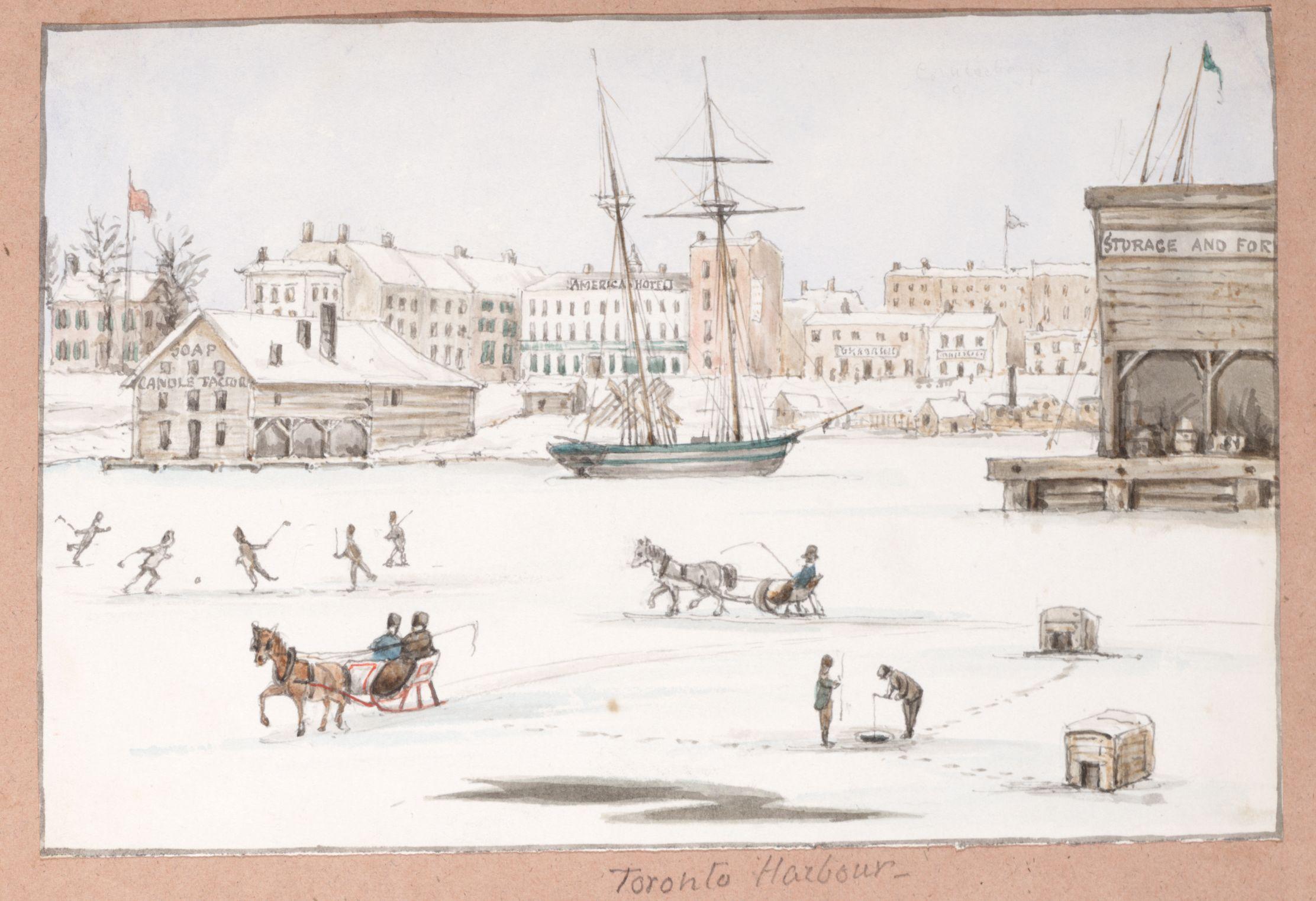 In the year 1856, the first panoramic photographic images of Toronto were taken from the roof of the Rossin Hotel which until 1969 stood at the corner of York and King streets. They are truly remarkable things to behold: thirteen separate images created using the collodion wet plate process, depicting a city looking rather dull, grey, and dusty, but entrancing nevertheless, in its shimmering silvery tones. For all their accuracy, however, the photographs lack vibrancy.

That’s just one of the reasons why an extraordinary new Canadiana acquisition of an album of watercolours by the Fisher Library is so important: because it provides a contemporaneous view of Toronto and southern Ontario that stands in stark contrast to its photographic counterpart. Even the winter views it contains are full of life, colour, and movement, often with a hint of whimsy thrown in for good measure. The sketches and miniature paintings may not have the precision that the new photographic medium could boast, but they certainly captured the exciting spirit of the times when Toronto was but twenty years old and full of promise. 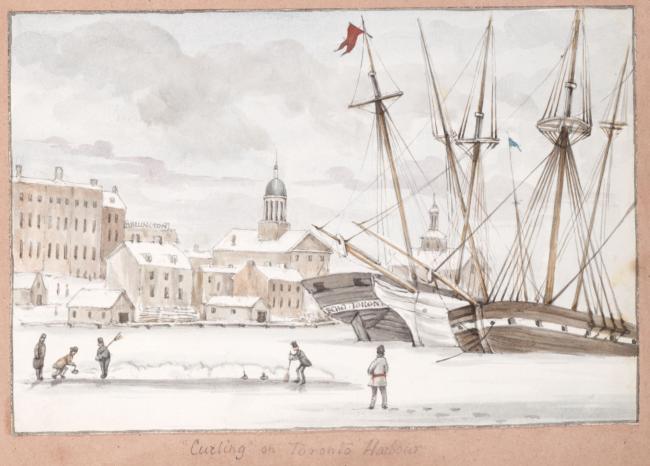 The album was likely the work of a pair of amateur artists who had arrived in Canada on board the Ottawa from Liverpool in September of 1854. James Graham, a Bengal Army surgeon, and his wife Sarah Chadwick were visiting Mrs Graham’s relations on their farm near Guelph called 'Ballinard', named after the Chadwick’s Irish hometown. Page after page provides some 170 delightful depictions of domestic scenes, farming activities, architectural studies, points of interest, humorous incidents and accidents, as well as the streetscapes and local characters the couple encountered during their more than two-year peregrination about the colony. While pictures of Guelph, Galt, Hamilton, Burlington, Bradford, Newmarket and a variety of other locations abound, the fifty-eight pictures of Toronto are what we are highlighting for the city’s 187th birthday this year. 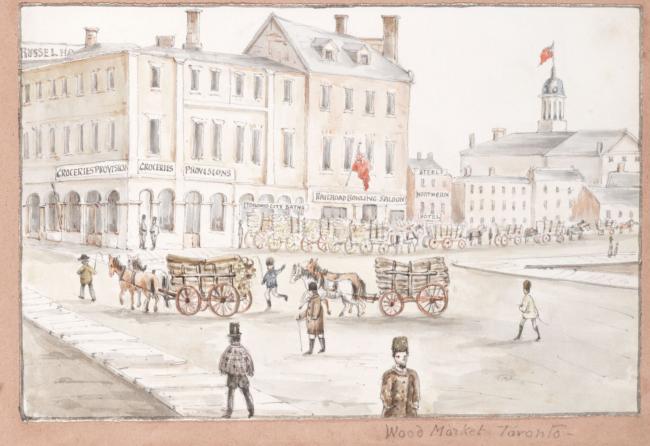 The area around Toronto Harbour, not surprisingly, features prominently among the sketches that date from a time when Front Street actually bordered Lake Ontario. Yachting in the summer, in the shadow of the dome of the magnificent St Lawrence Hall, gives way to depictions of iceboating and curlers competing for space with ice-fishing huts that are scattered across the frozen bay. The artists clearly had a sense of humour which is particularly evident from their depictions of the hotels in which they presumably lodged during their sojourns in the city. Attempts at old-world gentility translate into mayhem on the verandahs and in the dining rooms they visited. They appear to have been particularly amused by the excitement aroused by the arrival and departure of the coaches that linked Toronto to surrounding towns and villages. 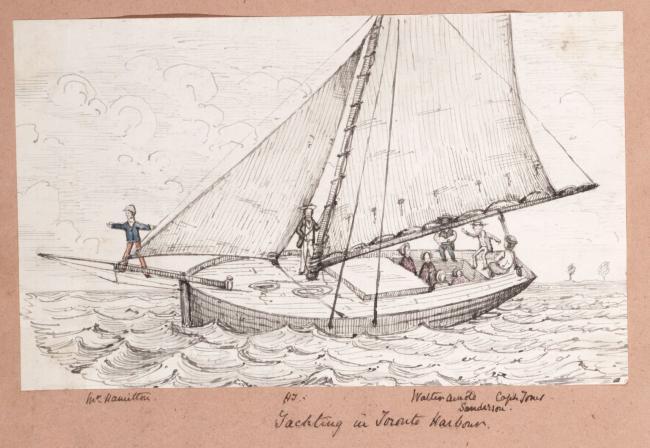 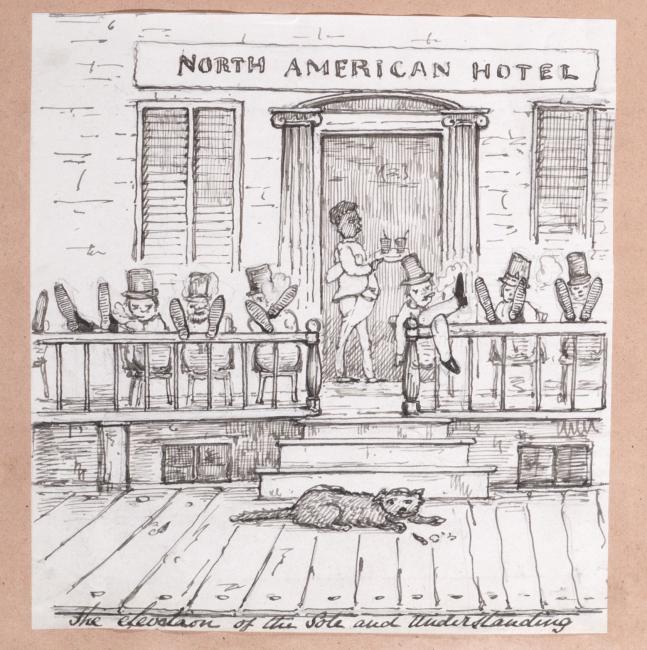 Sadly, the images also hauntingly communicate the prejudices of their creators and the society they were recording. On the one hand, their sketches help to correct our impression of Victorian Toronto as a solidly Caucasian bastion by reminding us of the presence of the Black and Indigenous communities here at the time. On the other hand, however, they do so through a set of caricatures with accompanying text that is offensive to modern sensibilities. Black men in particular are infantilized, and there is a generally servile undertone to the imagery that is probably far more accurate than many of us would like to acknowledge about our hometown. 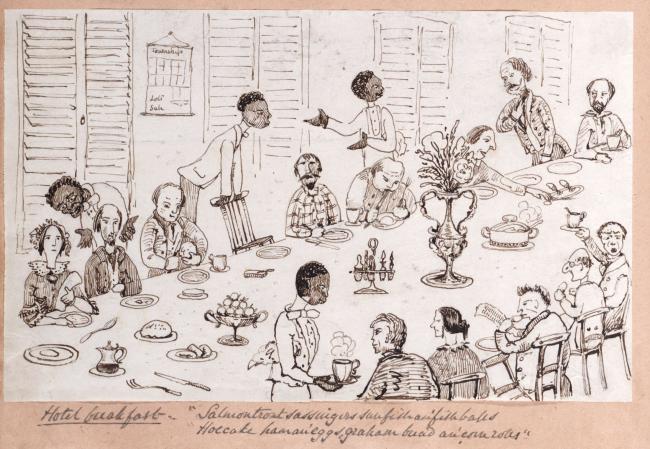 Many wonderful novels set in Toronto have reflected different periods in the city’s almost two-hundred-year history: Morley Callaghan’s Such is My Beloved; Hugh Garner’s Cabbagetown; Margaret Atwood’s The Edible Woman. One of my personal favourites, however, is Consolation by Michael Redhill, whose papers we are privileged to house in the Fisher. His story focusses on the mystery surrounding those wonderful collodion photographs from 1856 that I referenced at the beginning of this post. One of his characters muses about the importance of those particular images, but his thoughts perfectly resonate with my own feelings about this wonderful new album:

Didn’t those men and women, whose names we have all but lost, wander home in the evening to their hearths and speak of their future here? We are only faintly aware of the city they lived in – it is just intuition, a movement in the corner of the eye. Of that city, which must have stunk of horses and offal and pine oils and roasted fowl, of that air that rang with the cries of newsboys and the sounds of boots on hollow walkways and hooves on stone. But a hint of it is all we have.

This album is full of such hints; clues suggesting a society that was far from perfect, but one that had the tenacity and determination to get on with the job, which it has been doing now for 187 years. It provides a remarkable visual record of the City of Toronto and its surrounding environs from that era just before the photograph becomes king. It captures the energetic spirit of a youthful city trying to impress upon its Queen, thousands of miles away, that it is worthy of becoming the capital of the United Canadas. That honour would, of course, be bestowed elsewhere. Nevertheless, Toronto’s confidence and challenges are both clearly on display in these pages, and we at the Fisher are happy to offer them today as a tribute to the people who have built this metropolis.

The album of watercolours has been digitized and added to the library's Flickr site. You can access it via this link, or clicking on the image below.

So, Happy Birthday, Toronto! Here’s to many, many more. 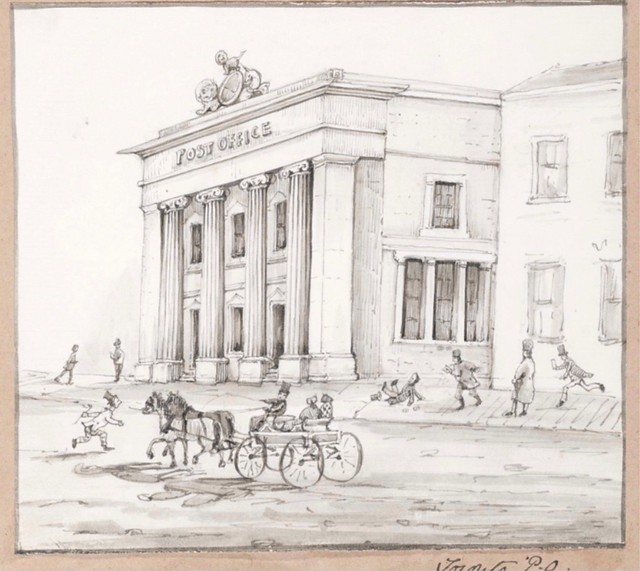