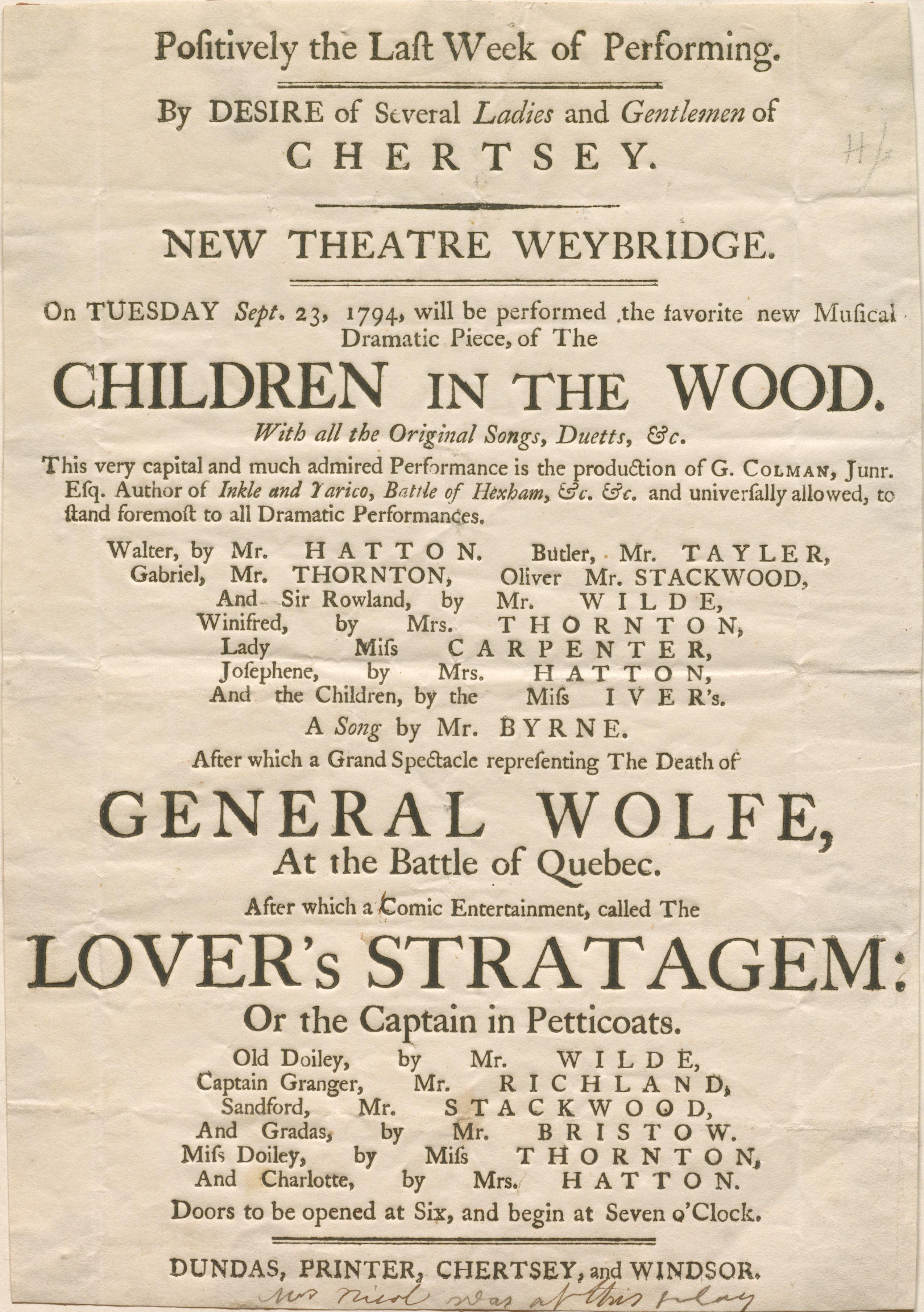 Playbills are a form of ephemera, a printed material intended for a short duration of use. Originally used as a marketing tool for theatres and performance troupes, the earliest playbills emerged out of a tradition of oral advertising, wherein performers would take to the streets with drums to announce the play of the evening. As theatres on the outskirts of the newly blossoming London attempted to draw urban crowds to their performances, this brash form of advertising roused complaints from locals, especially when multiple troupes would parade the streets at the same time. The subsequent, and more subtle, advertising strategy of the playbill is traceable in England as far back as 1560 in the form of small manuscript posters, giving way to larger printed broadsides by 1587.

Playbill printing rights were formally monopolized in sixteenth century England, meaning only one printer was legally allowed to print playbills according to the Stationer’s Register. Given this monopoly, the playbill format became standardized early on, being “about the size of ordinary note-paper” as the eighteenth century began and increasing to ten-by-eight-inches by its close. Until the early nineteenth century, the information included was also standardized, noting the performance time and location, the evening’s programme, the cast, and ticket purchasing details. Prominent cast members might be highlighted with a simple “and” printed before their names. This changed with the introduction of bigger and bolder typefaces beginning in 1803, which, combined with the addition of illustrative forms like woodcuts and coloured papers introduced in the mid-nineteenth century, allowed for greater visual impact. The broadside format of the early playbill – a single leaf with text printed on one side – is directly related to its mechanisms of distribution. “The most popular places for attaching playbills,” Tiffany Stern notes, “were the walls, doors and doorposts of London homes.” In addition to their fixture onto the city itself, playbills were designed for portability, so that performers making the daily advertising rounds could pass them on to potential audience members.

The theatre industry and its advertising methods have changed significantly since the production of early playbills. By the beginning of the 20th century, playbills were growing in length and scope, incorporating increased amounts of detail regarding the proprietors of the theatre, the set designers, and external advertisements. The contemporary playbill is usually presented in the form of a brochure – a pamphlet containing an unbound complete and short text with stiff paper covers, usually bi- or tri-folded, including advertisements and information on a narrow topic. As bill printing is no longer a question of monopoly or the sole means of advertisement, contemporary playbills can differ significantly, reflecting the “changing styles, proliferating formats, [and] shifting balances of priorities between information, instruction, stimulation, provocation, marketing and public relations” of the twentieth and twenty-first century theatre (Shaughnessy, 2010).

Let’s take a look at a couple examples of playbills from the Fisher Library collections:

Advertising a performance on the 23rd of September 1794, this bill is a fine representation of recognizable elements of a pre-nineteenth century playbill. Printed in broadside format on one side of the leaf and intended to be viewed unfolded, the bill presents all its relevant information to the reader at once. The topmost note that this is “positively the last week of performing” works as an advertising method to stoke the potential audience’s sense of urgency and shows the use of an “fi” ligature piece of type in the printing process. Note the subsequent invocation of the program’s design by “desire of several Ladies and Gentlemen of Chertsey,” reflecting the early theatre programming trend of performance based on audience demand. The New Theatre Weybridge is prominently positioned at the broadside’s head in uppercase letters and offers an example of the varied ways in which printers would format a bill with different sizes of type in a singular typeface for emphasis. The programme of the evening’s performances outlines the three major segments in the largest type used on the broadside, featuring the introductory “Musical Dramatic Piece” Children in the Wood, including its authorship and copyright information. Notably, the first and last entertainments of the night include cast descriptions, but the central “Grand Spectacle representing the Death of” General Wolfe, At the Battle of Quebec does not. This Grand Spectacle, however, is followed in typical form by a closing “Comic Entertainment,” Lovers Stratagem: Or the Captain in Petticoats. With “And” printed before their character’s names, we can see that Mr. Wilde, Mr. Bristow, and Mrs. Hatton were singled out as notable performers. The broadside concludes with the printer’s name and location, that of Dundas, Printer, Chertsey and Windsor, acting as advertising for their printing services as well as for the performance itself. The contemporary manuscript marginalia found at the bottom of the broadside makes note of a prominent member of this performances’ audience, stating that “Ms. Nicol was at this play.”

This 1987 playbill from Buddies in Bad Times offers a prime example of a twenty-first century playbill. Printed in brochure format composed of two unbound leaves, the content of the Theatrelife programme is a combination of production details and advertisements for local businesses and future theatrical productions, both by Buddies and the theatre companies with which they share a space. The main brochure appears to be rendered by photocopy on beige paper, with the front of the first leaf featuring a facsimile of the Theatrelife poster image. Beneath the show’s title is listed the theatre and its address, the weekly times of performance, and the dates of the show’s run, foregrounding the contemporary playbill as intended for circulation for the duration of a show’s mounting, rather than a singular event. The interior of the brochure contains credits and contextualizing notes, cast and crew biographies, and advertisement for Buddies and numerous local businesses. Barring the recto of the first leaf and the closing advertisements, the entirety of the text in this playbill is printed in a single typeface, with titles done in uppercase letters.

This program brochure is accompanied by two additional pieces of ephemera: a colour-printed brochure and a double-sided leaf. Presumably laid in to the Theatrelife program, the colour brochure is printed on a glossy paper stock in light blue and lavender with dark purple text. Advertising Buddies’ 1987-1988 season and their Season’s Pass subscription model on a central foldout, the brochure includes a detachable “order coupon” to be dropped off at the theatre’s office. The front of the brochure is sparsely decorated, with the verso featuring a personal message from theatre director Sky Gilbert. The accompanying double-sided leaf, also intended to be laid into the playbill proper, appears to be photocopied on plain white paper, and advertises two upcoming productions at the Poor Alex Theatre.

While current circumstances may bar us from accessing live theatre, there is so much to learn about the changing tides of theatrical production by analyzing the methods by which it is advertised. From 1794 to 1987, the changes in playbill production, design, and content are stark. As theatre continues to expand and evolve, through the pandemic and beyond, these methods of advertisement, provocation, and information are sure to continue to shift in illuminating ways.

Berger, Sidney E. The Dictionary of the Book: A Glossary for Book Collectors, Booksellers, Librarians, and Others. Lanham: Rowman & Littlefield, 2016.