Genre Terms by iSchool Students: The Geographic Atlas - Maps Through a Colonial Lens 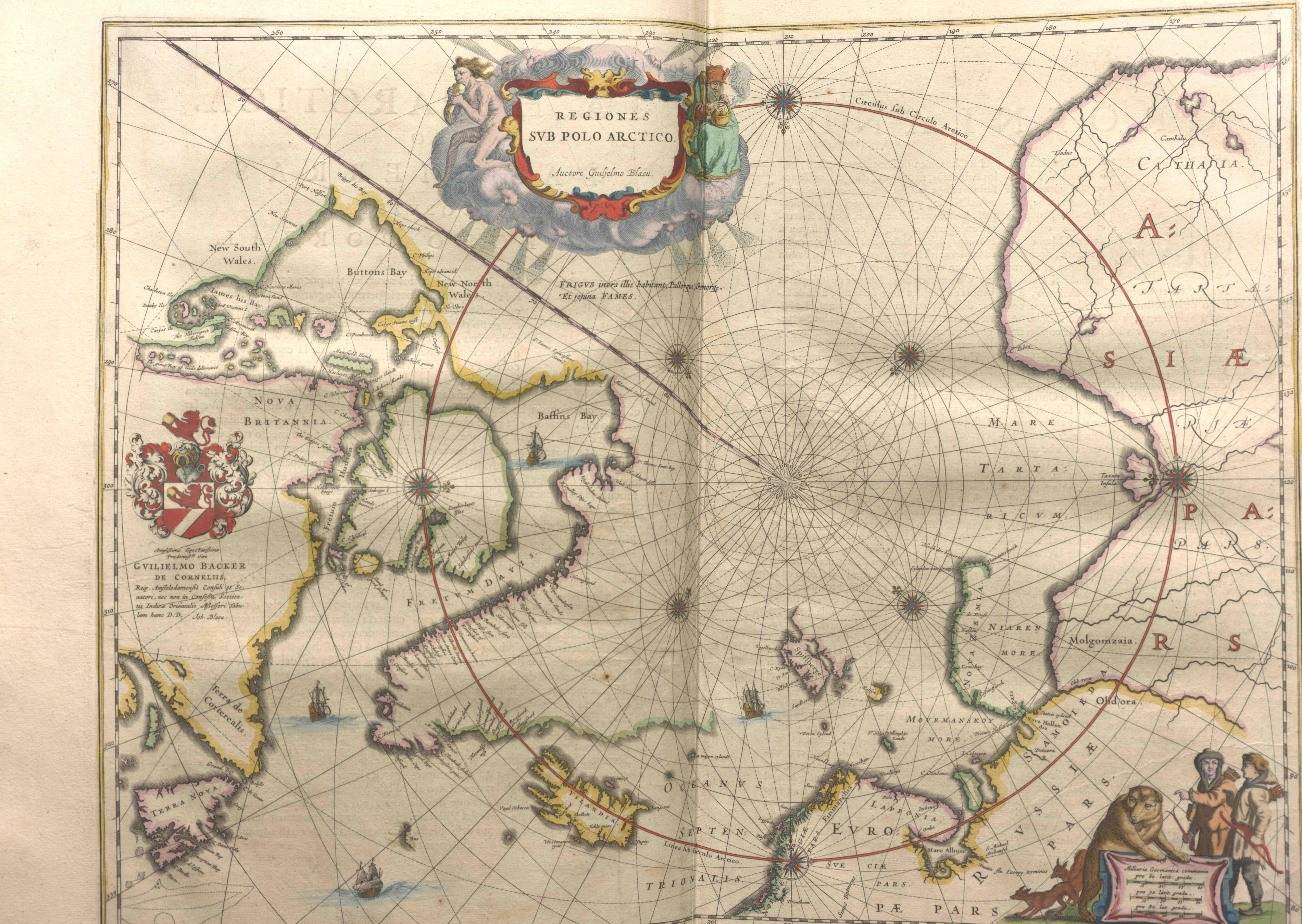 In 1570, the Flemish cartographer and geographer Abraham Ortelius (1527-1598) printed the first modern atlas titled, Theatrum Orbis Terrarum. The word "atlas" became associated with geographic books when the Dutch cartographer Gerard Mercator (1512-1594) included an image of the mythical giant Atlas on the title page of his collection of map called Atlas, sive Cosmographicae Meditationes in 1595. The Dutch Golden Age of Cartography, beginning with Ortelius and Mercator, continued into the eighteenth century when the British and French became more involved in the production of maps.

Prior to the modern atlas, collections of maps were assembled by booksellers at the request of clients. The transition from this structure to that of a modern atlas occurred when the map’s editor started to impose uniformity, creating an organized and cohesive collection of maps. Despite atlases perceived uniformity, their composition could still vary significantly.

An atlas generally consists of a title page, an index, and sections of maps and text. Maps, the main feature of atlases, highlight geographic features, topography, and political boundaries sometimes with text, providing information that maps cannot convey. Making the content of maps distinguishable and consistent was important because there was no single geographic language.

Placenames, labels, titles, legends, tables, and text were essential to providing context in printed map illustrations. Maps of the sixteenth and seventeenth centuries included graticule (a network of lines representing latitude/longitude and meridians), a compass rose, rhumb lines (the lines emerging from a compass rose that help guide navigation), and a scale indicator. They also featured nongeographical aspects like cartouches, figurative scenes, and heraldic devices.

The process of printing maps required various specialists and a medium that allowed for easy corrections, fine detail, and the combination of linework and lettering. Copper engraving (intaglio) became the method of choice in place of woodcuts (relief) in the sixteenth and seventeenth centuries. Engraving was better suited to producing curved lines and finer details. The printing press allowed for the comparatively easy reproduction of maps using copperplates and woodcuts, giving rise to the production of atlases.

Atlases were tailored to and reflected European expansion and worldviews. Atlases utilized the visual persuasive power of maps and catered them to the European public’s curiosity in the “foreign.” The design elements of atlases showed imagery of possession and dominance, legitimizing the control of these regions. Atlases soon became items of popular culture and scholarship printed in multiple languages.

Here are two examples of geographic atlases from the Fisher Library’s collection: 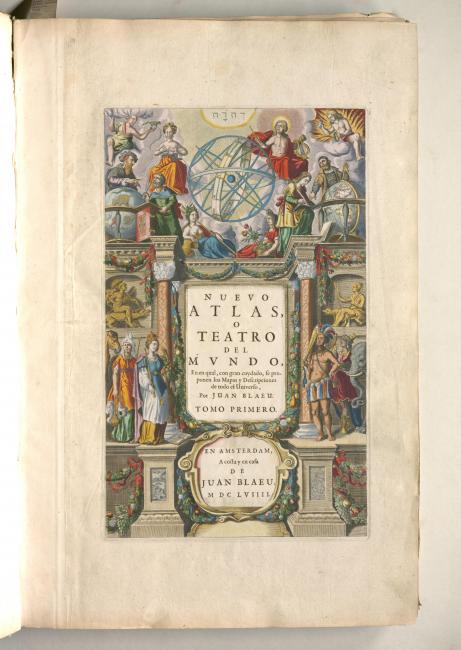 This Spanish first edition of Joan Blaeu’s, Atlas mayor was only issued from 1659 to 1672. A fire in the Blaeu firm’s publishing house in 1672 limited the editions that survive today. The atlas predominately covers the lands of the north – modern day Scandinavia, Greenland, Iceland, Finland, Northern Russia, the Baltic, and the Arctic - containing maps and extensive textual descriptions.

The cover of the sizeable Atlas mayor has an image of the mythical giant Atlas holding an armillary. The gold illuminated title page has four female figures representing the continents of Asia, Europe, America, and Africa. In the top third, the gods Apollo and Juno, the personification of the four elements, and sages/astronomers surround a large armillary sphere. Similar scenes appear throughout the atlas.

The other maps in the Nuevo atlas include placenames, labels, and brief textual descriptions in primarily Latin and Dutch. Maps prominently feature graticule and compass roses with radiating solid and dashed rhumb lines. Sections of the maps in the Nuevo atlas are hand coloured. Boundaries of territories are outlined with dashed lines and different colours with water appearing as blank space. Oceans are further marked with illustration of ships, waves, and sea monsters. The landscape is shown with drawings of settlements, rivers, mountains, fields, and trees.

The Nuevo atlas includes coloured cartouches. These decorated frames enclose text and include illustrations of mythical creatures and figures, as well as people, implements, and animals representing local life, industry, and goods. Several cartouches include coats of arms used to recognize who controlled different regions.

Moll, Herman. Atlas minor, or, A new and curious set of sixty-two maps, in which are shewn all the empires, kingdoms, countries, states, in all the known parts of the earth : with their bounds, divisions, chief cities & towns, the whole composed & laid down agreable to modern history. Dublin: Printed by Geo. Grierson…, [1732?]. (21cmx28cm) 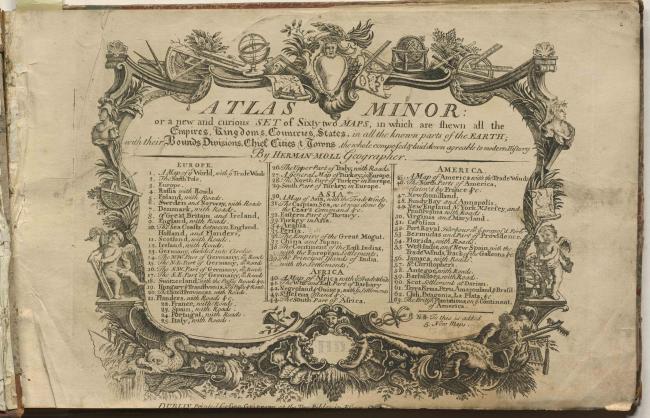 The Atlas minor was published by Herman Moll (1654-1732) a London mapmaker originally from Bremen, Germany. Moll tailored his atlases and maps to market trends. Moll’s maps focused on economic opportunities in distant places and European territorial claims, promoting British expansion. Moll became one of the most popular publishers of atlases and geographical books in the first half of the eighteenth century.

During his lifetime, Moll published over two dozen atlases, geographies, and histories. The Atlas minor consists of sixty-two engraved maps. The atlas is mainly comprised of maps of Europe and the Americas. The remaining maps include a double-hemisphere world map and those of Asia and Africa. The map’s text is mainly in English.

The atlas’s engraved title page has an elaborate border displaying illustrations emphasizing British advancements in geometric art, agriculture, and fishing. The decorated bolder encircles the atlas’s title and table of contents. Below the double hemisphere map, illustrations of armoured Europeans with weapons, Indigenous people, and imagery of wealth, knowledge, and technology accentuate themes and symbols of exploration, discovery, science, and power.