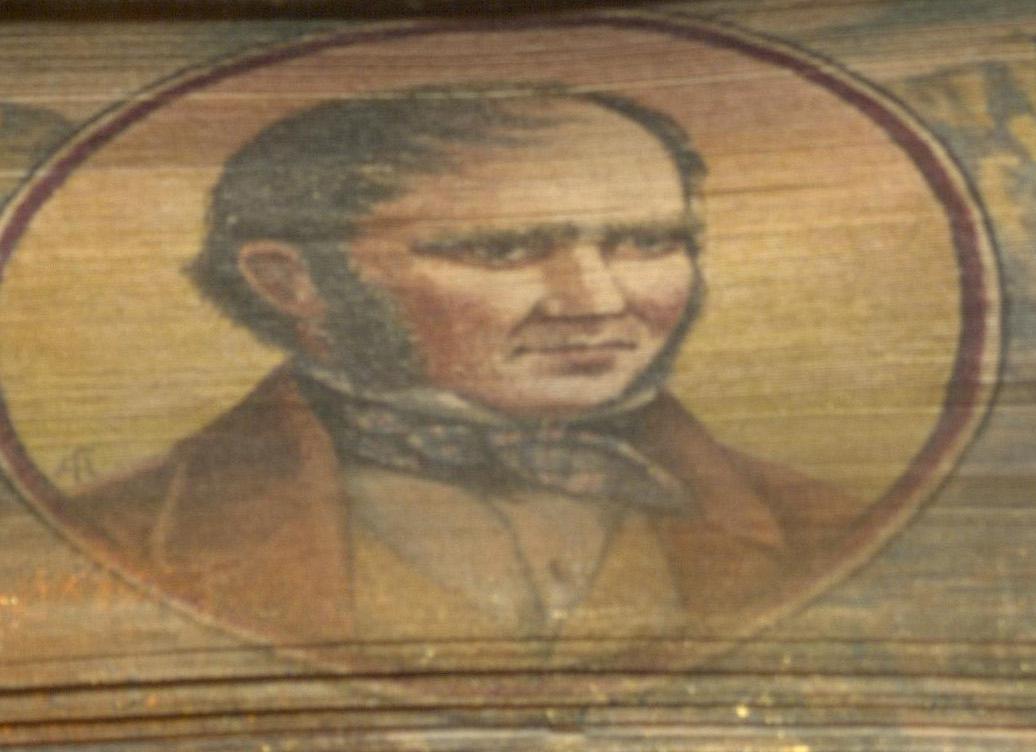 Fore-edge paintings – also known as fore-edge illustrations – are images painted on the side of the book opposite to the spine. When a book with this feature is closed, it appears like any book with gilded edges. However when the pages are fanned out, a hidden painting is revealed. Some books even have double fore-edge paintings, which can be seen when the book’s pages are fanned out in opposite directions.

The earliest examples of fore-edge paintings were used for means of identification. Since early manuscripts were heavier, they were stored horizontally with the fore-edge facing outwards. As a result, the title and author of these books were painted on the fore-edge to make it easier to identify the items. As bookbinding procedures improved over time, the author and title names were placed on the spine of a book instead, and the purpose of fore-edge paintings shifted towards that of decoration.

Books with fore-edge paintings were, and still are, expensive because of the high demand for these items and the amount of manual labour involved. The process of creating a fore-edge painting started with an artist using a clamp to fan out the pages of a book. The artist would then paint images onto the fanned surface using water colours and a dry point brush to avoid pigments from bleeding through the paper. Once the painting was completed, the edges of the book were gilded to hide the painting and protect it from direct exposure to sunlight. The majority of fore-edge paintings were completed anonymously. However, there were a few artists such as Ms. C. B. Currie, who were known to sign their work.

Although the practice of fore-edge painting is not very common today, it remains a physical feature of rare books that still captivates rare book enthusiasts and everyone alike.

SHAKESPEARE, William. The Dramatic Works of William Shakespeare: With a Glossary. Chiswick : Printed by C. Whittingham for T. Tegg ... [and 6 others], [1823]. 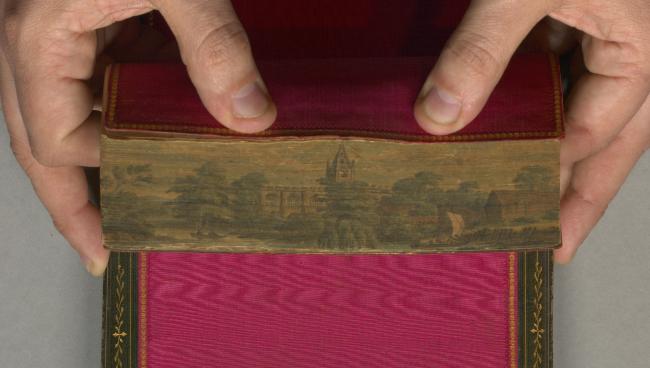 This book is a collection of works by William Shakespeare. It contains a great example of a fore-edge painting from early 19th century England. It is one of thirty books at the University of Toronto’s Thomas Fisher Rare Book Library that was recently discovered to have fore-edge paintings.

The fore-edge painting in this book depicts the landscape of Stratford-upon-Avon, a town in England which is famous for being the birthplace of William Shakespeare. The famous Holy Trinity Church of Stratford-upon-Avon is depicted as the focal point of this painting. The painting depicts the church surrounded by trees, water and other buildings which add to the picturesque image of the town.

Like many early examples of fore-edge paintings, this specimen depicts an illustration of a landscape and is painted on a piece of classical literature. Although it does not directly relate to the contents of this book, this fore-edge painting acts as a beautiful homage to the author, the great William Shakespeare himself.

DARWIN, Charles. Journal of researches into the natural history and geology of the countries visited during the voyage of H.M.S. "Beagle" round the world, under the command of Capt. Fitz Roy, R.N. London : J. Murray, [1845].

This journal was written by the famous naturalist Charles Darwin during his voyage on the H.M.S Beagle (1831-1836). It contains a great example of a fore-edge painting from mid 19th century England. It is one of thirty books at the University of Toronto’s Thomas Fisher Rare Book Library that was recently discovered to have fore-edge paintings.

This fore-edge painting depicts an oceanic landscape with mountains in the background. Additional elements of the painting include a portrait of Darwin, the H.M.S Beagle ship, and the portrait of three Fuegian Indigenous individuals. This illustration is an example of a fore-edge painting that was painted on travel related literature. There is a significant relationship between the contents of this journal and its corresponding fore-edge painting.

All of the images depicted in this painting represent important aspects of Darwin’s voyage (as outlined in contents of the journal). For example, the portrait of the three Fuegian individuals represent the three Fuegian captives who were forced to accompany Darwin and his colleagues on the voyage. This fore-edge painting provides insight into the vast amount of thought and effort put in to creating a wonderfully detailed physical manifestation of a book’s bibliographical features.