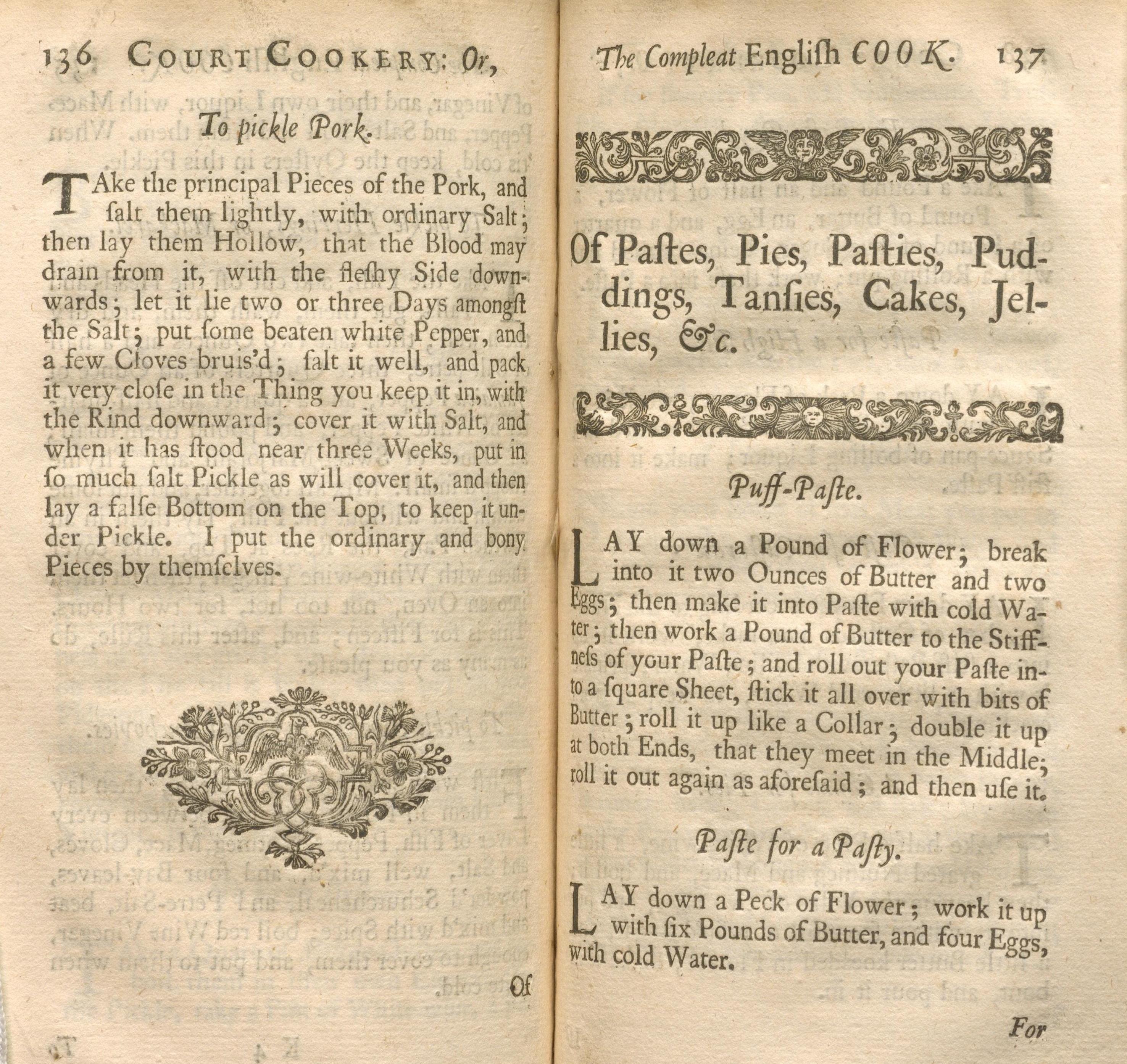 Cookbooks provide suggestive instruction of necessary life skills, pertaining mostly to food preparation or cleaning. The contents of the recipes tailored to the intended reader and the title would often label this audience. Before the seventeenth century, cookbooks were directed towards professional chefs. By the eighteenth to nineteenth centuries, food was mostly prepared by home cooks.

Cookbooks from this period were typically produced in octavo and quarto formats, with either Gothic or Roman typefaces. Very few before the 1800s included expensive illustrations, paper, or binding, yet they remained too costly for the lower classes to purchase. With the rise of literacy levels in the nineteenth century, cooks were encouraged to write simple notes, which in time became common practice. It was no longer just the rich who could read the recipes, or any other book for that matter. As printers and publishers realized the value of cookbooks as commodities, they began employing qualified people to translate and edit discovered manuscripts, with the purpose of printing and selling them. While some cookbooks are credited to specific authors, most are compiled by communities or publishers and thus remain anonymous.

Older cookbooks can reveal themes of immigration, health, diet and nutrition, socioeconomic status, the women’s movement and entertainment through their recipe choices, descriptions, and physical appearances. Closer attention to elements such as the publisher, publishing location, signatures, and marginalia can reveal where the food originally came from and migrated to, and who tended to cook the recipes.

Let’s take a look at a couple examples of cookbooks from the Fisher Library collections: 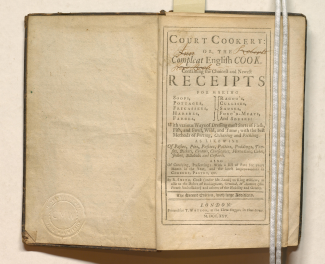 Typically, cookbooks published before the 1800s do not feature extravagant bindings, paper, or illustrations, and this source is a prime example of this. Although the binding is simple, the few woodcut illustrations included inside suggest that the printers invested in the production of this book. The food presented in courts were considered to be high-quality, with a selection of the best technology and employees at hand. Smith reveals that he is only a servant himself, yet has cooked for several Dukes and “other great Families.” This explains the use of the ordinary binding with inclusion of woodcut illustrations: it is printed by a top-tier servant, for a man named T. Wotton – who was most likely wealthy, and able to fund the smaller intricacies. The cookbook includes fancy recipes, ranging from oysters to orange pudding. Although the author claims that the cookbook is meant to be for the public, the expensive ingredient list suggests that the resource is better suited for servants who cook for individuals in higher positions, as lower-status communities typically would eat plain foods such as bread and gruel. Further, the note hints at the division between the lower- and the higher-class positions, as Smith refers to the lower class as the “inferior People.” With these two elements, this cookbook highlights the underlying attitudes towards different social classes throughout cookery history. The mentioned additives also suggest that the original price of the cookbook was perhaps more costly, as cookbooks that listed more lavish ingredients were typically expensive in price. This resource not only provides valuable information about the perceived difference at the time between servants and the wealthier parties, but also reveals how food culture could be exchanged between all of the hierarchies, through the help of cookbooks. 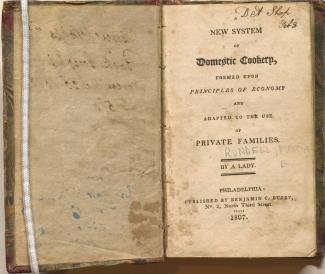 2.    Maria Eliza Ketelby Rundell. A New System of Domestic Cookery, Formed Upon Principles of Economy and Adapted to the Use of Families. Philadelphia: Benjamin C. Buzby, 1807. [Call number: cook 00368].

This is a monumental piece of writing in connection to the women’s movement. As the author is listed as “By a Lady,” and with the provenance of owners being only of women, the cookbook exchanges information about food culture for a group of individuals that were considered inferior, especially in cookery. The author’s goal is revealed through her statement that she did not receive a salary for the publication of this book, but merely wanted to distribute knowledge to the public. With this specific cookbook being published by and presented primarily to women, it would have allowed more women to revolutionize the cookery field. By the nineteenth century, female cooks became more common for middle-class families. Cookbooks such as this one would have been potential leading components to making such progressive changes, as it would have gradually granted women access to cookery knowledge from which they were originally excluded. Further, the cookbook tends to have a monetary theme in its writings, specifically in terms of saving money, and tailoring recipes toward the poor. This suggests that those who were using the cookbook were of lower economic status, as they would not be able to spend their salary as carelessly as one would in a very wealthy family. This source reveals the historical shift in attitudes toward women as cooks, and arguably contributed to the women’s movement that still exists today.

Notaker, Henry. A History of Cookbooks: from Kitchen to Page over Seven Centuries. Oakland, CA: University of California Press, 2017.