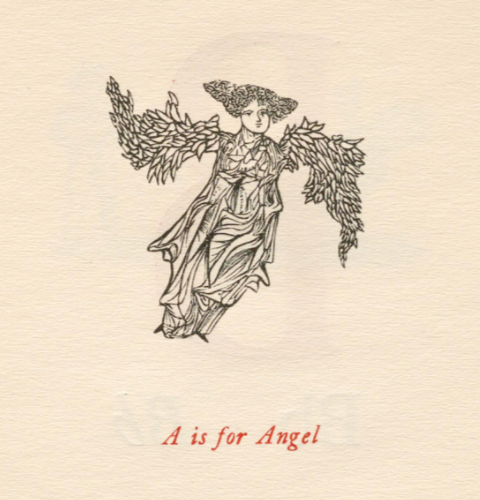 Alphabet books originated in the fifteenth century as ornate hornbooks that utilized “uppercase and lowercase letters, common syllables, and a few short prayers as a medium to teach reading.”[1] In the seventeenth century, the form shifted towards primers, in which “a picture was presented for each letter along with a short rhyming verse having a main word beginning with the featured letter.”[2] Besides pictures and a typically unvarying arrangement of letters, alphabet books generally have a consistent design and are brief. The functions of alphabet books can include “(1) an introduction to or an overview of a topic, (2) a stimulus for research, (3) oral and written language development opportunities, and (4) multicultural awareness.”[3] The instructive value of alphabet books cannot be overstated in the evolution of any person into a fully literate being.

Alphabet books are important to early development, or early engagement with a language; they “provide opportunities for readers to develop and enhance identification skills, to encourage letter recognition, to acquire and understand new words, to promote the mastery of letter forms, and to provide a variety of other learning experiences.”[4] As a result of coming into contact with alphabet books, “children are exposed to skills such as sequencing, matching, classification, discrimination of likenesses and differences, rhyming, recall, memory, drawing conclusions, and following directions.”[5] The proliferation of alphabet books right up to the present speaks to their importance; while not always appreciated as works of art, they frequently serve as the basis for literacy in societies around the world. The presence and expectation to include illustrations in this genre seems to have grown over time. The pictures in alphabet books tend to reinforce the alphabet being learned, but some go beyond this narrow function of simply helping to illustrate each letter. While perhaps less formal than the novel or the textbook proper, alphabet books have and continue to serve an important function in the instruction of literacy in those young and/or new to a given language.

This book demonstrates how the alphabet book is not always necessarily intended for children. Leonard Baskin (1922-2000), an artist who occupied many different fields, has crafted, alongside his wife Esther, what is in many ways a prototypical alphabet book, with letters from A to Z and visual exemplars for each letter. The Baskins make use of Thomas Bewick (1753-1828) engravings alongside some other gathered illustrations. With such a small print run and the greeting attached to the title this seems intended for friends of the artists or a small audience of collectors who might appreciate its graphic properties. The alphabet book as a beautiful object is strongly evoked here, existing primarily for reasons of aesthetic pleasure. Though often not considered as art objects, there are plenty of handsomely illustrated alphabet books out in the world. Were they not made mostly for children there might be more recognition of that fact, but coming from as esteemed an artist as Leonard Baskin, there is an indication here that an audience exists for this kind of work, however small it might be.

In a way Baskin’s book is as unusual as the alphabet book’s predecessor the hornbook. Where the latter is almost entirely a pedagogical instrument, Baskin’s book exists mostly to show off a range of illustrations. Just what a book could or should be is always an open question, and these items help demonstrate why that definition must remain broad and encompassing.