Fragments of the Ancient World: A Glimpse into the Papyri Collections at the Fisher 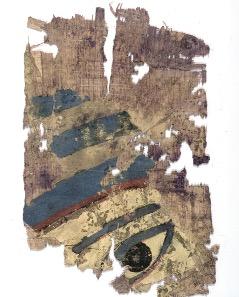 The Fisher's sizeable collection of over 400 fragmented Greco-Roman papyri from Egypt dating between the 3rd century BCE and the 3rd century CE is one of the library's great collections. The greater part of the library’s papyri holdings consists of two main collections on long-term deposit: the Victoria College Library papyri and the Classics Department papyri. The former and smaller collection, made up of 35 papyri fragments from Faiyum, El Hibeh, and Oxyrhynchus in Middle Egypt, arrived at Victoria College Library in 1904 and 1906 from the Egypt Exploration Fund, now known as the Egypt Exploration Society (EES), which is the largest non-profit organization supporting archaeological excavations in Egypt and Sudan. The archaeologists who carried out this particular excavation and published the papyri findings were Bernard P. Grenfell and Arthur S. Hunt. The EES also sent four papyri excavated in Faiyum to the University of Toronto Libraries in 1901. These papyri, which form part of the Library’s permanent collection, are housed with the Victoria College Library papyri. The language of the papyri is Greek and the texts that they preserve cover a variety of subjects: fragments of Classical works (e.g. Homer’s Iliad, Thucydides’ History of the Peloponnesian War, Demosthenes’ Third Philippic), legal documents (e.g. marriage contracts, land transfers, tax receipts, wills), miscellaneous accounts and receipts, and personal letters. 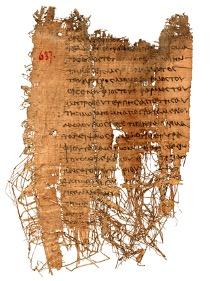 The Classics Department papyri were assembled by Alan E. Samuel in 1966 when he arrived at the University and deposited into the Fisher’s collections in August 2004. The collection consists of three inventory types: the Paper Towel Inventory, which was purchased in 1965 by Samuel when he was in Egypt; the Oxford University Gazette Inventory, which consists of small fragments excavated in El Hibeh by Grenfell and Hunt in 1902 and 1903; and the Rostovzteff-Welles Inventory, which consists of large fragments from the Grenfell and Hunt excavations at El Hibeh. The language of the papyri is predominately Greek, but there are also papyri written in Demotic, Coptic, and one instance of Arabic. Most of the Greek fragments were reused for cartonnage dating to the Ptolemaic Period of Ancient Egypt (305–30 BCE). The textual contexts of this collection are more administrative in nature, but still deal with a variety of matters: legal documents, miscellaneous accounts and receipts, and personal letters. 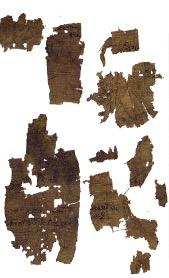 One fascinating aspect of the Classics Department Papyrus Collection held at the Fisher is the notable amount of paint and gesso evident, which indicates the papyri were reused for cartonnage. Cartonnage is a type of composite material made of layers of linen or papyrus covered with plaster that was used in Ancient Egyptian funerary masks, a practice that began in the First Intermediate Period (c.2180–2055 BCE). During the Third Intermediate Period (c.1069–715 BCE) cartonnage was used to make the innermost case for the mummified body, replacing the use of wood for coffins as had nominally been the practice before. Finally, during the Ptolemaic Period separate cartonnage pieces replaced the full-body cartonnage covering. The individual pieces commonly covered the face, the chest, the torso, the legs, and the feet, and they would be decorated by gilding and/or using a variety of pigments for paint to depict divine and/or royal iconography, geometric designs, and hieroglyphic inscriptions. Reusing papyrus that was considered worthless was a common practice during the Ptolemaic Period, especially discarded archival documents regarding governmental and economic matters—explaining the sizeable appearance of administrative papyri in this collection. 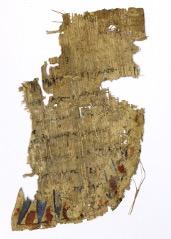 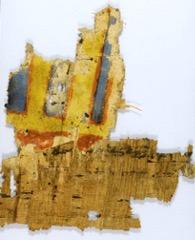 Though the cartonnage papyri are severely fragmented, there is still much that can be gleaned when looking at the colouring and geometric designs. Extreme amounts of blue colouring, or sometimes an alternation of blue and yellow (or gold leaf) stripes, can indicate that the fragment formed part of a mummy mask. Such cartonnage nominally depicted a blue tripartite wig to invoke divine affiliation and/or rebirth. According to Egyptian ideology, the hair of gods and goddesses was made of lapis lazuli, a semi-precious stone with an intense blue colour, and the alternation of blue and yellow was iconographically used to evoke the moment when the first rays of light emerged from the night sky or primeval ocean—reflecting the birth of the sun god Re and thus symbolizing revitalization. Depictions of concentric geometric designs curving to form a U-shape indicate that the fragment formed part of the cartonnage place atop the chest, which replicated the usekh-collar—a broad collar made of tubular and teardrop beads of precious and semi-precious stones, sometimes also including amulets. A kneeling winged goddess holding maat-feathers—ostrich feather symbolizing truth and cosmic harmony—and crowned with a disc represented Isis and was commonly placed atop the torso of the mummy or on the chest in conjunction with the usekh-collar design. The representation of this goddess served an apotropaic purpose due to her maternal and magical connotations. Overall, these papyri fragments become an excellent source of understanding iconographic and funerary practices during the Ptolemaic Period, as well as socio-economic matters and the languages/scripts of Greco-Roman Egypt. 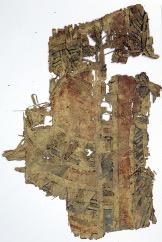 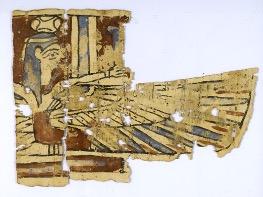