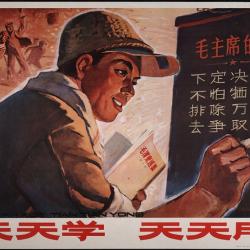 The year 2016 marks the fiftieth anniversary of the beginning of the Great Proletarian Cultural Revolution, a social and political movement launched in May of 1966 by Mao Zedong (1893-1976), then Chairman of the Communist Party of China, which lasted until Mao’s death in 1976. The Cultural Revolution sought to implement “true” Communist thought and to make dominant Maoist ideology. Taking this milestone as an occasion on which better to understand the Cultural Revolution, the Fisher Library will host an exhibition on the relation of this movement to visual art and literacy. Specifically, the exhibition will explore the importance of reading during this period, examining how propaganda posters and other artifacts of the Cultural Revolution represented the writings of Chairman Mao, how these posters and artifacts popularized a culture of Mao’s books, and how, in turn, text-heavy propaganda posters, artifacts representing books, and the large-scale printing of books of Mao Zedong Thought (Mao Zedong sixiang) created a context for increased literacy.

Highlights will include a selection of rare propaganda posters from the seminal phase of the Cultural Revolution (1966-69). From posters illustrating quotations from Chairman Mao to those encouraging the masses to read, these works reveal a distinct aesthetic in this early phase of the Cultural Revolution. In addition, the exhibition will feature contemporaneous books such as The Selected Works of Mao Zedong (Mao Zedong xuanji, 1951-1960) and The Quotations of Chairman Mao (Mao Zhuxi yulu, 1964), as well as translations of Mao’s works into multiple foreign languages. The exhibition and accompanying catalogue will also feature artifacts from the Cultural Revolution related to literacy and the practice of reading, including Mao badges, paper cuts, archival photographs, pamphlets, postcards, and children’s toys.