The Pride of Oscar Wilde 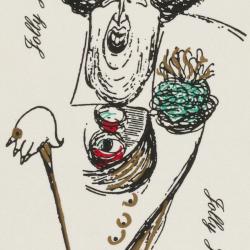 Oscar Wilde (1854-1900) was an Irish poet and playwright, famed for his wit, his elegant appearance, and his celebration of decadence. The author of popular plays such as Lady Windermere’s Fan (1892) and The Importance of Being Earnest (1895), he also wrote a collection of stories for children, The Happy Prince and other Tales (1888), and the novel The Picture of Dorian Gray (1890). Themes of male love, friendship, and same-sex desire appear in certain of his publications. Wilde faced libel and criminal trials involving his ‘indecent’ activities in the gay underworld of London, and in 1895 was convicted of gross indecency and sentenced to two years’ hard labour.  His reputation as a ‘homosexual martyr’ and ‘moral rebel’ was quickly embraced by those within the first wave of the gay-rights movement. This display showcases a selection of Wilde’s literary works, essays, and poetry from the De Lury Collection of Anglo-Irish literature.