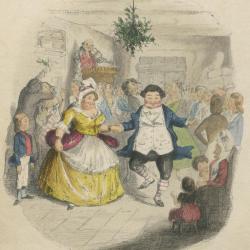 As Christmas approaches, many of us will read, listen to, or watch adaptations of Charles Dickens’s A Christmas Carol. This story, which is so closely associated with the holiday season in the English-speaking world, marks its 175th anniversary this year. The first edition, released on 19 December 1843, sold out  almost immediately, and was reprinted eight times within the first six months. The ghostly tale, with its emphasis on care for the poor, and keeping one’s priorities in order, remains timely in 2018. Numerous artists have tried their hands at depicting the key moments in the story, and it is their efforts which this exhibition particularly celebrates.

Take a walk with the ghosts of Christmas Past, Present, and Future!