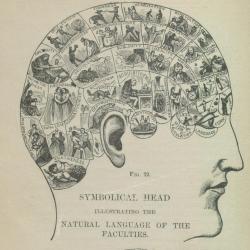 For the month of April, the Fisher will be highlighting a small collection of recently acquired phrenology material. Phrenology was a set of pseudo-medical theories and practices that developed in the nineteenth century, based on the notion that a person’s character was reflected in the size and shape of their skull. Phrenologists spread their ideas across Europe and Britain through public lectures and demonstrations using skull measurements and charts. Part science, part moral philosophy, part quackery, phrenology was controversial yet important moment in the history of the study of the human mind and brain. The Fisher collection includes printed and manuscript material from Orson and Lorenzo Fowler, American phrenologists who popularized phrenology across North America, plus works by earlier theorists Franz Joseph Gall and Johann Spurzheim. Also on display are original phrenological heads produced by the Fowler brothers.