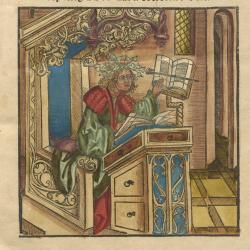 The great Latin poems of the Classical past were among the first works of literature to find their way into print, and it was not long before early editions of these works were adorned with woodcut illustrations. The epics of Virgil, Lucan, and Valerius Flaccus, which are rich in mythological and historical detail, lend themselves in particular to illustration, as do the plays of Terence, with their vividly drawn characters and lively plots. The poetry of Horace, which tends to have less of a narrative focus, did not receive quite as much attention from illustrators, though some early editions did include woodcuts. Two of the books featured in this display - the Virgil and the Horace - are new additions to the Fisher Library’s collections.

This display was curated by Timothy Perry, and installed by Linda Joy.