Literatura de cordel: Images of everything for everyone 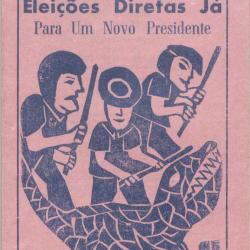 Literatura de cordel, or “string literature,” is the tradition of popular pamphlet poetry that emerged in the Brazilian Northeast at the turn of the nineteenth century. Its name is derived from the manner in which poet vendors suspend their pamphlets by strings to display them at the weekly local literary fairs (feiras) at which pamphlets are sold.  Cordel poems are notable because they catered to the diverse but specific interests of audiences with various degrees of literacy. They are also known for the woodcut illustrations featured on their covers, known as xilogravuras. First appearing in the 1920s, these images were originally meant to visually represent the stories of each poem for illiterate folheto buyers, and to make cordel pamphlets more perceptibly-enticing. As such, they depict as diverse a range of topics as their textual counterparts, and appear in a variety of dynamic styles. Today, these “images of everything for everyone” serve as the visual representatives of cordel culture as a whole, and long been the focus of positive attention from viewers and critics around the world. These illustrations are the primary focus of this month’s display, which highlights the Fisher’s collection of over 2,000 cordel pamphlets published from the early-twentieth century to the present.