Horrors that Cannot be Expressed in Words: Visual Testimonies of the Holocaust 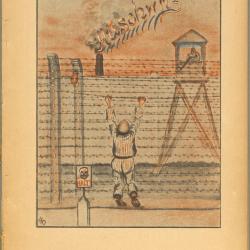 January 27, 2020, marks the 75th anniversary of the liberation of Auschwitz, the largest complex of concentration and extermination camps established and operated by the Nazis during the Holocaust. It is estimated that 1.3 million people or more were deported to Auschwitz between 1940 and 1945; of these, 1.1 million or more were murdered. The inmates included Jews, non-Jewish Poles, Roma, Soviet prisoners of war and other Europeans. Those who were not murdered in gas chambers died of starvation, exhaustion, disease, individual executions, beatings, or medical experiments. In mid-January 1945, as Soviet forces approached, thousands of the remaining inmates were killed and the SS began evacuating the camps, forcing nearly 60,000 on death marches. When the Soviet army finally entered Auschwitz on January 27, 1945, now commemorated as International Holocaust Remembrance Day, over 7,000 remaining inmates were liberated, the majority of whom were severely ill and dying.

To commemorate International Holocaust Remembrance Day and this significant anniversary, this month’s display highlights visual and artistic materials from the Fisher Library collections that capture Jewish life before the war, the horrors of the war and liberation from the camps.

Display curated by Leora Bromberg and Nadav Sharon and installed by Linda Joy.