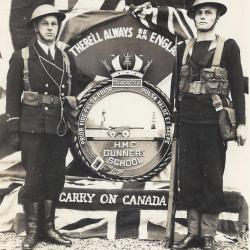 Eighty years ago, on 10 September 1939, Canada entered the Second World War, one week after Britain had entered the fray. This second great international conflict in as many generations would eventually see some 1.1 million Canadians serve in the ranks of the Canadian Army, the Royal Canadian Navy, and the Royal Canadian Air Force, as well as in other forces from across the Commonwealth. In the end, approximately 42,000 would be killed and another 55,000 would be wounded. This exhibition tells some of their story, using many of the unique items from the collections found in the Fisher Rare Book Library.