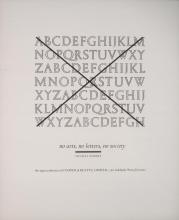 Order Catalogue
During its almost seventy years of existence, the firm of Cooper & Beatty had been prominent, first in Toronto and Ontario, and then during the 1950s and 1960s in the rest of Canada and the United States. The firm prided itself on its tradition of creative excellence; at one time or another, typography created by Cooper & Beatty craftsmen appeared in the print ads of every major advertiser in Canada. This exhibition, curated by Edna Hajnal and Richard Landon, and the heavily illustrated catalogue document some of the highlights of the firm's history, based on the records housed at the Thomas Fisher Library.