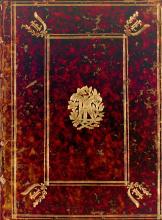 Catalogue is no longer available.The best in contemporary British bookbinding was showcased in the travelling exhibition, Designer Bookbinders in North America. Featured was the work of twenty-four Fellows and Licentiates of Designer Bookbinders, Great Britain’s principal bookbinding society and one of the foremost in the world. The forty-seven bindings featured in the exhibition confirm the great diversity and high quality of contemporary British bookbinding. Literary inspiration ranges from The Four Gospels to Unity Universe, An A-Z by Sue Doggett and Wrenching Times – Poems from “Drum Taps” by Walt Whitman.