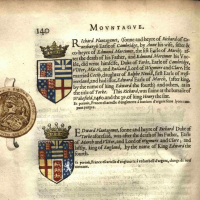 The Sidney Thomson Fisher collection contains some of the Thomas Fisher Library’s most prized possessions, including the first four folios of Shakespeare’s Works (1623, 1632, 1664 and 1685) and a rich collection of Wenceslaus Hollar’s famous engravings. Although the works of Shakespeare and Hollar have been meticulously described and the records have been made available through the University of Toronto online catalogue, the majority of the Sidney Fisher books were searchable only through the library’s card catalogue. Starting in January 2010, the rest of the collection was gradually catalogued afresh and the records made available online. Priority was given to the collection’s more than one hundred sixteenth- and seventeenth-century imprints, including the many editions of Greek and Roman classics, various works on history and antiquarianism, and a rich collection of English literature, including early editions of Chaucer, Gower, Lydgate, Jonson and Spenser.

The Sidney Fisher books on heraldry

The Sidney Fisher copy of the 1619 edition of Ralph Brooke’s A catalogue and succession of the kings is particularly interesting because the numerous blank shields in the book have been handcoloured. While several of the other Sidney Fisher books on heraldry have also been handcoloured, only his copy of Brooke’s A catalogue seems to have been done by a professional, possibly somebody affiliated with the College of Arms. 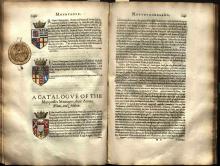 This image shows a typical example of the coloured shields from the Sidney Fisher copy of the 1619 edition of Brooke’s A catalogue and succession of the kings.

The two images below illustrate one of the many differences between our two copies of the 1619 edition of Brooke’s A catalogue and succession of the kings. In addition to being uncoloured, this shield and coronet taken from copy 1 exists in an uncorrected state. The coronet above the shield is a duke’s, when it should be an earl’s. While the error has been corrected in copy two, it is interesting how that correction has been done. Rather than reprint the page in full, the printer William Jaggard, or someone else working on his or Ralph Brooke’s behalf, has used a slip-on cancel to hide the error. The STC records only five other surviving copies of Brooke’s book with this coronet in the corrected state.