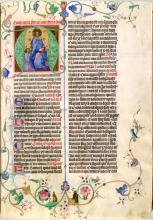 Order Catalogue
As the Centuries Turn features a selection of manuscripts and printed books from the collections of the Fisher Library, exhibiting the book as it has appeared over the centenaries of the past thousand years. Beginning with a large and much worn Hebrew manuscript of the Pentateuch dating from approximately 1000, the exhibition goes on to other manuscripts of the next 300 years, including such splendid illuminated manuscripts as the Missale Pragense, produced between 1400 and 1410 in Bohemia. Early printed works include a 1498 Bible, with woodcut illustrations and initials, and a 1499 illustrated edition of Terence's Comoediae. Printed books from 1600, 1700, and 1800 include works of science, exploration, and literature. Canadian works are represented in both 1800 and 1900, including such evocative items as the McTavish, Frobisher and Co. fur trade agreement of 1800, and photographs of Dawson City at the turn of the twentieth century. The exhibition and catalogue have been a collaboration involving many of the staff of the Fisher Library.