Skip to main content
The Fisher Library is providing limited reproduction, reference and research services to patrons.
Information and instruction on accessing these services. All in-person visits have been suspended.
COVID-19: Updates on library services and operations
U of T Coronavirus (COVID-19) FAQs
Get help from the Libraries for your online teaching, learning and research.

Through the Revolving Door: The Fisher Library Blog

Over 100 twentieth-century photographs of Rio de Janeiro, Brazil mounted in this manuscript album (MSS 04075) housed at the Fisher Library, have recently been digitized and made available in our latest Flickr album. The manuscript album is bound in wooden covers, with pictorial marquetry of Rio de Janeiro’s Guanabara Bay depicted on the front cover. Inside, 124 gelatin silver photographs and 15 postcards capture what many consider the ‘golden days’ of the city, marked by the Independence Centenary International Exhibition (September 1922 - March 1923) which commemorated the 100th anniversary of Brazil’s independence. This collection of photographs includes several panoramas of natural sites in and around Rio, such as Guanabara Bay and Sugarloaf Mountain alongside architectural and urban street views of the Theatro Municipal [Municipal Theatre], Avenida Niemeyer, and various neighbourhoods, beaches and harbour views. Together, these photographs present Rio de Janeiro as a picturesque, up-and-coming and modern city, with both natural and historical landmarks. The last few pages of the album present a series of postcards of local Brazilian merchants, depicted fulfilling their everyday tasks and sales at the market, in addition to a couple of images of large ships. Postcards depicting natural and urban landscapes of Rio or those which documented the life and practices of locals became quite popular souvenirs among tourists who wanted to bring a small curiosity back home with them.

While the manuscript album itself bears no apparent hints to its creator(s) or date of production, many of the photographs are numbered, captioned and signed in negative, attributed to the local photography studios of Carlos Bippus (active 1910s-1930s) and Thiele-Kollien, circa 1925. 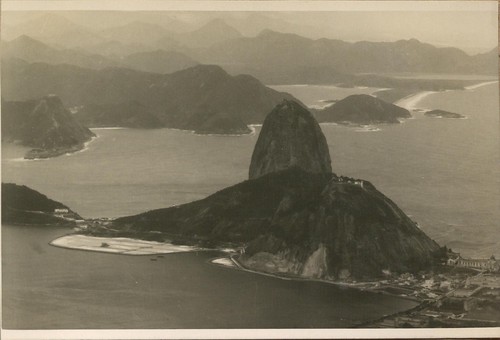 As Brazil grew and developed as a nation, so too did its embrace of photography. The daguerreotype (the first commercially available photographic process, widely used around the 1840s and 1850s) was embraced by Emperor Pedro II as a sign of modernity and Brazil’s place among civilized nations. By the 1850s, photography had become popularized as a mark of status in Brazil. Most Brazilian photographers around this time focused on the portraiture market, but a smaller cohort experimented with the technology to document the physical development of the country, with interest in catering towards the tourist market, as well as realizing the scientific potential of the camera. One of the most prolific and innovative photographers in Brazil at this time, Marc Ferrez (1843-1923), rose to prominence through his development of new techniques for panoramic photography, which allowed him to capture views of the city of Rio de Janeiro and its surrounding landscapes. Ferrez’s nineteenth-century innovations and iconic photographs surely set the stage for the later panoramic landscapes featured in this manuscript album. Eight albumen prints produced by Ferrez are featured in another, earlier Fisher Library Flickr album, available here. 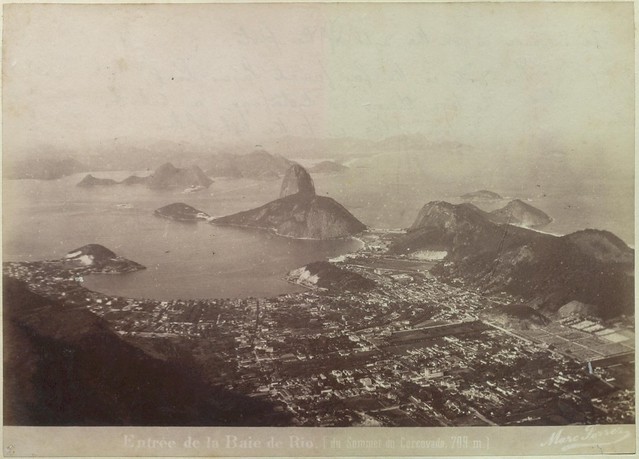 While Ferrez, among others, including later studio photography as presented in this manuscript album, were drawn to natural landscapes, the “governing spirit of their works was progress rather than romanticism" (Gelber, 2016). In other words, these photographers not only wanted to capture the lush natural features of the country, but they were also determined to document the impact of civilization on the land.

For a glimpse into these beautiful and historical natural and urban landscapes, check out the Fisher Library’s two digital albums of early photography in Brazil, now available on our Flickr page.