Skip to main content
The Fisher Library is providing limited reproduction, reference and research services to patrons.
Information and instruction on accessing these services. All in-person visits have been suspended.
COVID-19: Updates on library services and operations
U of T Coronavirus (COVID-19) FAQs
Get help from the Libraries for your online teaching, learning and research.

Through the Revolving Door: The Fisher Library Blog

Birds of a Feather: Watercolour Birds with Original Feathers Glazed on (c. 1866)

A flock of watercolour-painted hummingbirds, roosters, grouse, pheasants and various waterfowl can be found in this discrete untitled manuscript album, housed at the Thomas Fisher Rare Book Library (call no. MSS 01024). The album contains 42 watercolour portraits, each painted on a small card and mounted two per sheet, on the rectos only. The album is bound in a contemporary black leather binding, with covers bordered in gilt and blind. What draws our attention to this particular manuscript is that each bird portrait is transformed into a one-of-a-kind object with the added layer of real bird feathers applied and glazed on top of the paint. The colours, texture and iridescence of the feathers contribute a sense of movement and liveliness to each portrait. 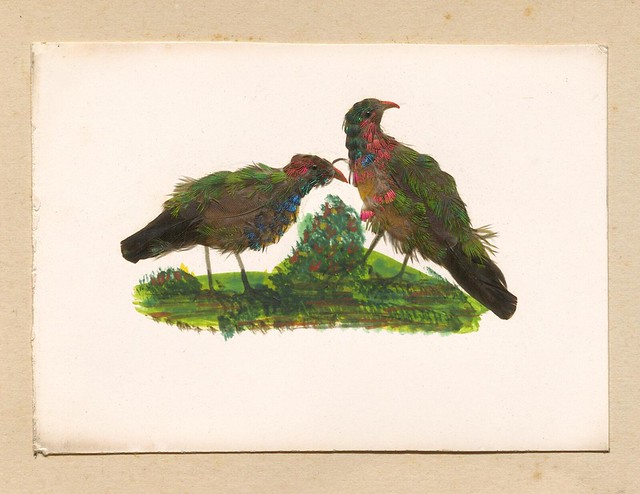 The production of this manuscript in many ways remains a mystery. An inscription on the second front flyleaf, which reads “Mexico, 1866,” suggests its probable location and date of production. Although the creator(s) of this album appears to be unknown, it may possibly be attributed to or associated with French ornithologist Adolphe Boucard (1839-1905) who travelled in Mexico during this period collecting bird skins and feathers for Philip Lutley Sclater (1829-1913) and others (Kofoid, 1923, p. 86). Another prominent bird artist working in Mexico around this time was Rafael Montes de Oca (active 1883-1885) a Mexican naturalist on the Mexican-Guatemalan Boundary Commission, best known for his work with hummingbirds (Borrego, 2012).

The inscribed suggestion that this manuscript was created in Mexico places the work within a longstanding tradition and practice of featherwork in Mesoamerica. Feathered mosaics were a prized and prominent art form in Mesoamerica before the Spanish Conquest in 1521, created by skilled artisans known as Amantecas (Kern, 2017, p. 319). After the Spanish Conquest, this practice continued, and soon came to be an exotic curiosity and symbol of the ‘New World,’ mesmerizing Spaniard and other Europeans. To Europeans, this new shimmering and colourful art form served particularly well for creating religious mosaics, for which it was quickly adopted (Kern, 2017, p. 320; Kilroy-Ewbank, 2016).

This manuscript is also a curious example of the Victorian phenomenon of ‘natural illustration,’ a term which indicates that a book features mounted organic specimens (Zytaruk, 2015; 2018). These specimens are most commonly pressed and dried flowers, including seaweed, which can be found in books known as herbaria. Another example of books from around the same period made from the materials they discuss are xylotheks; books made from wood which contain wood specimens (Meier, 2015). Books with mounted specimens may range from domestic albums compiled by private or amateur collectors to more scientific or even published collections, known as exsiccatae (Zytaruk, 2015, p. 13). In depicting the birds in playful settings and on small and unlabelled cards, this feather manuscript certainly veers away from the more rigorously scientific towards the private or more artistic end of this spectrum. While specimens may be mounted to the page as they are in their natural form, in some cases, they are arranged or translated “into new visual forms,” whether into shapes, landscapes or aesthetic arrangements (Zytaruk, 2015, p. 14). In the bird manuscript, the feathers are not mounted for the purpose of identifying their species, but rather to re-represent their species in a new visual and artistic form.

With the inclusion of real bird feathers, each bird painting or arrangement becomes a unique or one-of-a-kind object. Since no two natural samples are exactly alike, each painting or copy of this manuscript would be considered a ‘variant’ (Zytaruk, 2015, p. 14). One of the world’s oldest feather art manuscripts, known as The Feather Book (1618), is preserved at the McGill University Library. The birds depicted in The Feather Book are considered “unconventional” for representing the birds not simply in static profile, but also in flight or in motion (Meier, 2015). This is certainly the case for our later feather manuscript, in which some of the birds are not merely depicted in profile, but in motion, whether in flight, perching on branches or interacting with other birds. These actions in combination with the added layer of the feathers bring a sense of liveliness to these paintings.

Perhaps another reason that natural illustration seems striking and unique is that in integrating organic materials into the realm of textual objects such as books and letters, it serves as a reminder of the natural materials that make up books themselves, from the paper and ink to leather covers. In a way, natural illustrations may serve to reunite these materials back together. The term ‘natural illustration,’ is prone to misunderstanding or different interpretations that vary between institutions and cataloguers. Ultimately, “volumes with natural illustrations resist any strict categorization” (Zytaruk, 2018, p. 187). In other words, it is okay if this bird manuscript and its creator(s) remain in some ways mysterious or uncertain, for the very nature of this book is informal, artistic and experimental. According to Zytaruk (2019), “a focus on the practices of Victorian natural history means paying attention to anonymous albums of specimens and to the marginalia in botany handbooks left by now untraceable readers” (p. 8). Though many questions regarding this manuscript remain unanswered—why and how it was made and by whom—this charming album still holds a great deal of research value and potential to illuminate new insights on the material culture of the book.

Meier, A. (2015, October 16). The fantastic 17th-century book of birds, made from feathers. Hyperallergic. https://hyperallergic.com/245169/the-fantastic-17th-century-book-of-birds-made-from-feathers/